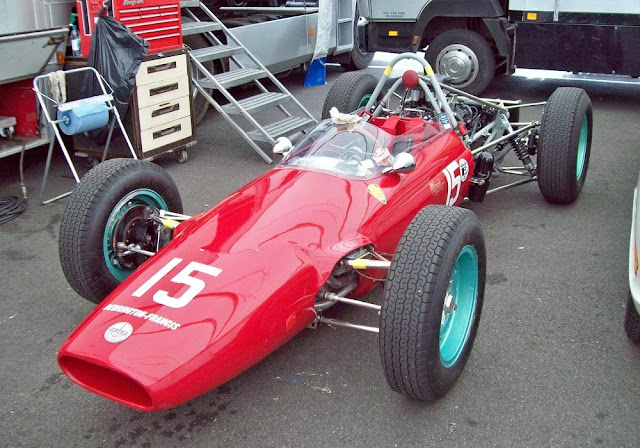 Few F1 cars can top the ATS Tipo 100 for eyebrow-raising intrigue. In \’61, Ferrari\’s race division was riding high. As F1\’s new 1.5-litre era dawned, prospects for the Italian marque looked rosy. The fire-engine red, shark-nosed Ferraris ruled the F1 roost. Enzo Ferrari – founder of the firm – was, doubtless, very happy. Not so, some of his employees. At the end of the \’61 season, Enzo fell out with his top engineers. The outcome was that they picked up their spanners and left.

Ring-leader of the Ferrari rebels was Carlo Chiti. Rotund of build – and temperamental by nature – he was widely considered a design genius. He was also thought to be a thoroughly good egg. Chiti led his troop of dissident technicians to Sasso Marconi – near Bologna. In no time, he had set up his own factory/foundry. He had financial clout – courtesy of a trio of industrialists. Chiti was a man on a motor racing mission. Following the mass walk-out from Modena, Ferrari found they had a rival. Namely, ATS – or, Automobili Turismo Sport. There was now a new team on the Bologna block. And Carlo Chiti was the man in charge.

The V8-powered ATS Tipo 100 debuted at the \’63 Belgian GP. It created quite a stir at Spa Francorchamps. In a piece of PR many a more modern team would be proud of, the ATS transporter was parked away from the paddock. F1 aficionados could talk of nothing else. When the Tipo 100s were revealed, the buzz was electric. Come the green light, however, the build-up was not backed up on the track. From the mechanics\’ perspective, the cars were far from ideal. To wit, their chassis had to be sawn, then re-welded – just to change the engines. Not really what an ex-Ferrari race engineer was used to! Certainly, two high-calibre drivers had been recruited to the ATS cause. Phil Hill was a former world champion. And Giancarlo Bhagetti had won the \’61 French GP. As it turned out, though, even their combined talents could not stop the Tipo 100 under-achieving. Through \’63 – and the following two seasons – results ranged from disappointing to dire. Over time, the ATS project petered out. Its gallant challenge to the force of Ferrari failed. Nonetheless, Chiti – and his renegade team – displayed courage and integrity. In the end, though, the small-scale ATS team – and the Tipo 100 – simply ran out of steam!