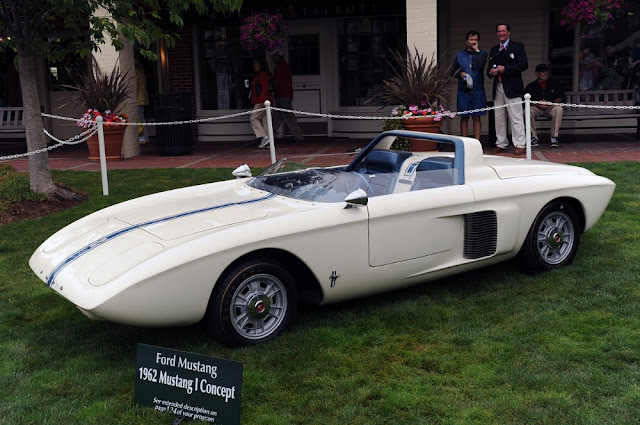 Lee Iacocca is an automotive legend! As soon as he set eyes on the Ford Mustang 1 prototype, he knew it could become an American icon. That was at Watkins Glen racetrack – in October \’62. Dan Gurney and Stirling Moss were driving the Mustang 1 that day. It wowed the crowd as a whole – not just Iacocca! The young Ford product planner saw potential written all over it. His only concern was that it may be too extreme for the mainstream motorist. He resolved to tone down the car\’s shape a tad. But – that he had seen the future of Ford – he was in no doubt.

The Mustang 1 Iacocca witnessed at Watkins Glen, then, was never going to be the one which rolled onto the roads of America. The roadster\’s bodywork – by Troutman and Barnes – was a low, flat slab of aluminium. Good aerodynamics were a given. Cutting edge retractable headlights smoothed the flow of the car\’s nose. A stylish rollover bar was perfectly in tune with its hair-raising heritage. Two huge air intakes were a clear pointer to the race-bred beast within!

The Mustang 1\’s motor was German in origin. The V4 was sourced from the Ford Taunus 12M. It was moved back in the chassis – the better to power the rear wheels. 109bhp was on tap – giving a top speed of 115mph. So, while it may not have been in the same league as the P-51 fighter plane – after which it was named – the Mustang 1 still shifted at a fair old clip. A 4-speed gearbox kept things civilised. Capacity was 1,498cc – or 91ci, in old money. Suspension was by wishbone and coil spring. Front disc brakes were a more than welcome feature. Steering-wheel and pedals were fully-adjustable. It would be hard to overstate the impact the Mustang 1 made. Iacocca was Italian-American. In styling terms, the lines of his car saluted the land of his forebears. Two \’dream cars\’ were duly constructed. In time, Ford Mustang muscle cars did full justice to the Mustang 1 concept. They would, of course, become some of the most coveted machines in the history of motoring. Lee Iacocca made his mark all right!