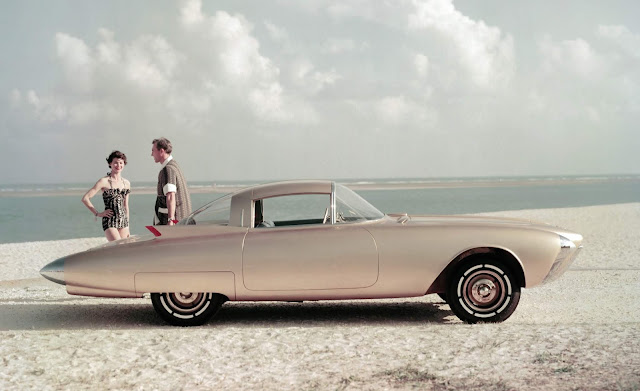 In the mid-Fifties, Oldsmobile\’s brand-image looked decidedly dowdy. The Golden Rocket was intended to change that. As a \’dream car\’ concept, it was never destined for the open road. Its purpose was to fire up Oldsmobile\’s creative energies again. A missile on wheels, the Golden Rocket\’s mission was to blaze a trail for Oldsmobile roadsters to come. To that end, it featured in the \’56 Motorama. It toured the US as part of GM\’s state of the art automotive show. Fast-forward a year and a half – to \’58 – and the Golden Rocket could be seen tripping the light fantastic in France. The car was a must-see exhibit at the Paris Motor Show, that year.

When it came to its shape, the Golden Rocket\’s stylists went ballistic – literally! Space-age design was all the rage at the time. Oldsmobile went to town with it. In profile, it was more like a projectile than a car. With its chromium nose – and \’bullets\’ back-end – the Golden Rocket was a startling statement of intent. A set of \’shark fins\’ only added to the suspense!

Inside, too, the Golden Rocket stood out. When a door was opened, it triggered an automatic response. The roof-panel pivoted up. Simultaneously, the seats rose 3″ – and swivelled invitingly. The steering-wheel\’s position was adjustable. The Golden Rocket, then, was more than a mere showcase – it was a technical test-bed. This was a heady time to be an automotive designer. The future seemed up for grabs – with anything possible. Saying that – with its venerable V8 engine – the Golden Rocket was not entirely divorced from the past. But – on the whole – the idea was to innovate. In that regard, it was like a breath of fresh air in Detroit. Garbed in shimmering plastic, the Oldsmobile Golden Rocket promised a brave new motoring world!