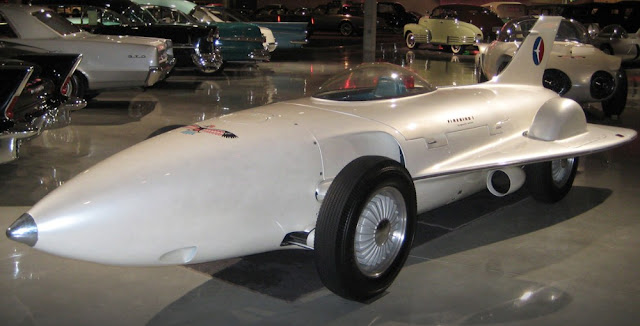 GM\’s mythical Motorama show spawned many an unusual exhibit. An orgy of automotive exoticism, visitors expected the radical and bizarre. Though whether any of them were prepared for what was served up to them in \’54 is debatable. GM\’s Firebird XP-21 took prototypical outlandishness to a stratospheric level. First off, was it a car or a plane? It appeared to have elements of both. Since it did not fly, presumably that made it a car. But, it did not look like a car – at least, not in any conventional sense. The answer, of course, was that it was a concept car – one which pushed the believability limits, both visually and technically.

The Firebird\’s space-age looks were drawn by Harley Earl. He was GM\’s legendary head of design, at the time. From its projectile-style nose – to rear-mounted fin – the Firebird came with dynamism built-in. Its gas-turbine-engine made 370bhp. Sadly, its top speed stat was never established. Perhaps that was for the best. It was a \’dream car\’, after all. Could it have kept pace with the Douglas Skyray – the aircraft on which it was modelled? Probably not … though its aviation-style cockpit suggested otherwise! Mauri Rose was the Firebird\’s fearless test-driver. He gave the XP-21 the thumbs up – impressed, as he was, by its straight-line stability.

GM\’s Firebird was America\’s first gas-turbine \’car\’. Over time, a few other marques followed suit. The XP-21\’s \’Whirlfire Turbo-Power\’ turbine revved to 13,300rpm. The \’gasifier\’ that turned it spun at nearly twice that speed. Heat from the exhaust reached 677°C. When the time came, drum brakes and wing-flaps slowed the plot down. The XP-21 was the first of a trio of Firebirds. \’55 saw the Firebird II – a 4-seater affair. In \’58 came the Firebird III – this time a 2-seater. By that stage, the car was in road mode – a test-bed for cutting edge components. If there was any doubt about GM\’s commitment to the future, the Firebird XP-21 blew it well and truly into the weeds!