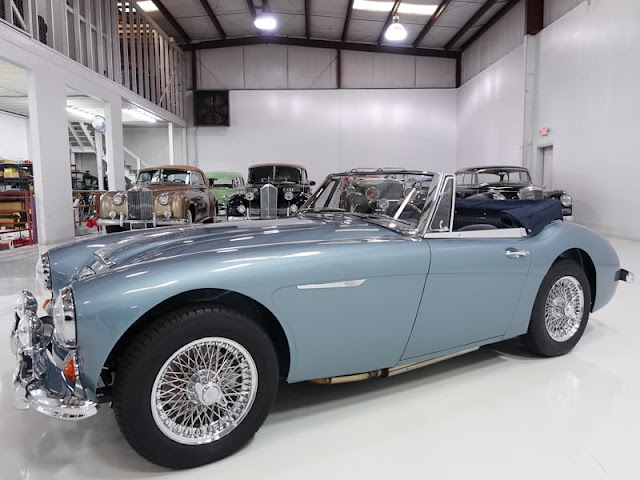 The Austin-Healey 3000 MkIII is a seriously iconic British sports car. One of the legendary \’big Healeys\’, it was made in the Midlands, England. Bodies were built by Jensen – in West Bromwich. Final assembly took place in MG\’s Abingdon factory. First of the breed was the Healey 100. It recycled the 4-cylinder engine from the Austin Atlantic. But it was when a 6-pot motor was lowered into the 3000 model, that the Healey range really sprang into life.

The 3000 MkI arrived in \’59. In design terms, it was not too different from what had gone before. It was a sizeable, stylish 2-seater. The game-changer was beneath the bonnet. The six-cylinder engine kicked out 124bhp. Top speed was 114mph. To cope with the extra horsepower, robust front disc brakes had been fitted. Come the 3000 MkII version, and output had been upped to 132bhp. That was largely courtesy of triple SU carburettors. \’64\’s MkIII racheted up power still further – to 148bhp. The speed-needle now flickered at over 120mph. At that point, the motorsport world sat up and took notice. Before long, the Healey roadster had morphed into a works rally car … and a highly competitive one, at that.

Visually, the 3000 was notably low-slung. Whilst that certainly looked cool, it did not help the car\’s rallying cause. On the stages, ground clearance could be suspect. As automotive design, though, the MkIII was a triumph … as it were! Its dramatic grille – and subtly sloping lines – were a joy to behold. Its wire wheels were web-like works of art. The curved windscreen – and neatly-folding hood – were stylish embellishments. The 3000\’s rear-end was as shapely as it gets. Distinctly British though it was, the MkIII was built primarily for the American market. Ironically, it was strict Stateside safety regulations that brought about its demise. Production stopped in \’67. By then, though, the Austin-Healey 3000 MkIII was woven into the fabric of moody, muscular sports cars. Wonder if Marlon Brando ever drove one!