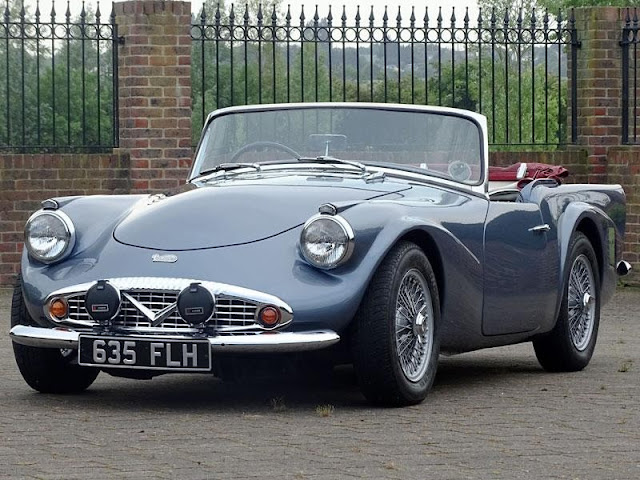 When first seen – at the \’59 NY Motor Show – the Daimler Dart was derided as an ugly duckling. The consensus was that the fins looked dated, the headlamps bug-eyed – and the grille a bit … well, fishy! Over time, though, qualms over the SP250\’s styling subsided. Daimler was on a downswing in the late Fifties. New management sought to remedy that – by emulating Jaguar, Triumph and MG. Daimler, too, would produce a sports car for the American market. The potential problem was that Daimler lacked experience with sports cars. Indeed, the Dart was the only one the marque made. To get the ball rolling, it used the chassis and suspension set-up from the Triumph TR3. After that, Daimler turned to the bodywork. Which is when things started to go awry. The glassfibre shell Daimler designed seemed fine. Until the going got a bit rough – at which point the doors were liable to fly open! The writing was on the wall for the Dart as early as 1960. Jaguar then took over the SP250 project. Sir William Lyons was the new CEO. As well as being a top-flight manager, he was a stylist of high repute. Sadly, Lyons and the Dart did not see eye to eye. Its \’unwieldy\’ form upset his sensibilities. One of the two had to go. It would not be Lyons.

Prior to the Jaguar takeover, Edward Turner was managing director at Daimler. Before that, he had worked at Triumph – in its motorcycle division. His engine design work there had achieved widespread acclaim. Indeed, in the bike world, he was legendary. Some of that had rubbed off on the Dart. Indeed – courtesy of Turner – its motor was pretty much flawless. Torquey but smooth, it catapulted the lightweight Dart to a top speed of 125mph. 0-60 took 9.5s. The engine\’s hemispherical combustion chambers – and twin SU carburettors – were key to its performance. Plus, the SP250 returned a respectable 25mpg. Best of both worlds, basically. Brakes-wise, a full set of Dunlop discs were fitted.

In a bid to drive up US sales, attempts were made to upgrade the Dart. It was given a stiffer chassis and bumpers – as well as a few more creature comforts than it had previously provided. From a marketing perspective, the SP250 was pitched between the cheaper Triumph TR and MGs – and the more expensive Jaguar XK150. 2,644 SP250s were built. Production ceased in \’64. The ugly duckling never did morph into a graceful swan. But, beauty is in the eye of the beholder – and Daimler Dart fans loved it all the same!