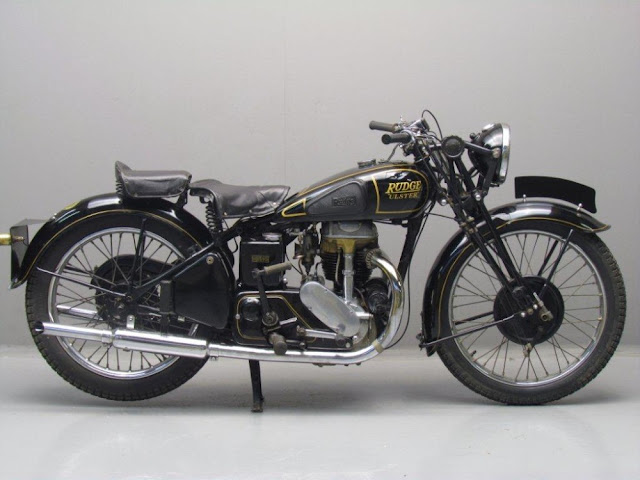 The Rudge Ulster was based on the Rudge Multi. The latter – launched in 1911 – came with 21 \’infinitely variable\’ gears. \’Multi\’, indeed! In theory, there was not a slope in the UK it could not get up. An intricate rear pulley system auto-adjusted the bike\’s final drive belt. The ratios were selected via a lengthy gear-lever, located to the left of the fuel-tank. From early on, Rudges sported spring-up stands. Back mudguards were hinged – facilitating wheel removal.

A production racer Multi won the 1914 Senior TT. And – for the Rudge race team – there was more success to come. It was in \’28, though, that the firm secured its place in history. A Rudge won that year\’s Ulster GP. A street-legal version duly appeared. It was named after the illustrious Irish road race. The Ulster inherited the engineering subtleties of its Rudge roadster predecessors. Unsurprisingly, it was a serious seller. Graham Walker was Rudge\’s sales manager. Fittingly, it had fallen to him to pilot the Ulster to victory.

The Ulster only added to the roll-call of Rudge\’s technical innovations. A 500cc single, its engine was fitted with four valves. They helped output 30bhp. That pushed a dry weight of just 290lb. The Ulster featured Rudge\’s linked braking system. The foot-pedal retarded both drum brakes – while the hand lever applied added front-end bite. Ahead of the game, to say the least. On the racing front, Rudge carried on winning well into the Thirties. In \’39, however, financial problems came to a head. Rudge folded shortly thereafter. The Ulster, though, had carried the flag for one of the most forward-looking firms in motorcycling history!