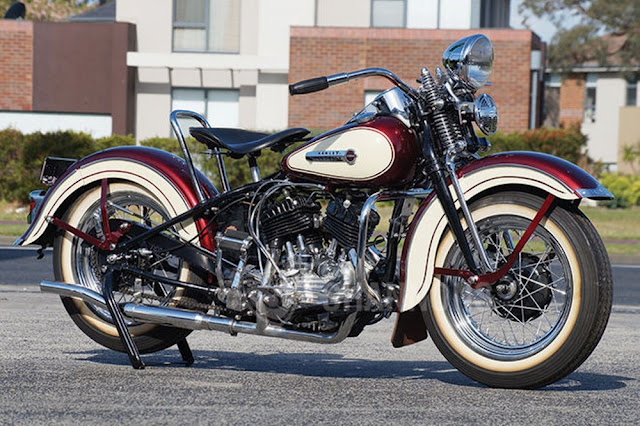 These days, the Harley-Davidson WL 45 is seriously old school. That is a good thing, of course! \’45\’ referenced its engine capacity – in cubic inches. The side-valve 45° V-twin slung the WL to a top speed of 75mph. A long way from Harley\’s high-tech Evo powerplant of today. Still, that was plenty enough speed, given the WL\’s suspension set-up – or lack of it. Well, at the rear, at any rate. The WL was a full-on factory hard-tail … no concealed shock absorber here! The WL\’s sprung saddle, though, kept it comfy. At the front, however, things were looking up – hopefully, not literally! \’49 saw the introduction of Harley\’s Girdraulic damping system. It was duly fitted to the WL\’s \’springer\’ front fork assembly. Friction damping was thereafter consigned to the Harley history book.

The WL\’s motor made 25bhp. That was an improvement on the W model – compression having been upped a tad. 4,000rpm was now available. The 3-speed gearbox was controlled by a hand shift and foot clutch. While the roadster\’s performance was not exactly earth-shattering, Harley\’s WR race bike did what it could to redress the balance. To be fair to the road bike\’s output, it did have its work cut out. 528lb wet was plenty of weight for the WL to heave. Saying that, it was not excessive for a bike of its size. Bear in mind that in the Forties, carbon fibre was just a glint in a scientist\’s eye!

Bikes like the WL45, then, were a bridge between Harley\’s vintage crop and its current range. 45ci equated to 750cc – or middleweight, in modern money. The 45-powered bikes were hugely important to Harley. Indeed, they helped the firm weather the Great Depression. Were it not for those bikes, Milwaukee\’s finest may well not have survived. Many a biker\’s life would have been lessened – such is the impact Harley-Davidson has had. So, much is owed to the WL 45 … and its pioneering predecessors!