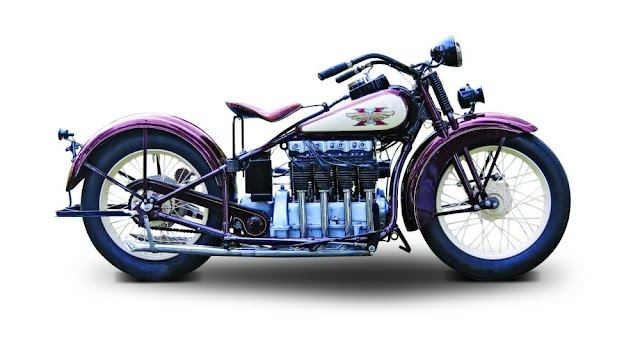 As early as 1929, the Henderson KJ was hitting 100mph. It came courtesy of a 1,301cc in-line four engine – outputting 40bhp. What made the top speed stat yet more impressive was that the KJ weighed in at a portly 495lb. The KJ\’s plucky powerplant was an air-cooled eight-valve inlet-over-exhaust unit. Whatever its configuration – it clearly worked!

In its day, the KJ was a luxury motorcycle. It flaunted a long list of fancy features. For starters, electric lighting, a fully-enclosed chain and leading-link forks. State of the art stuff, in the Twenties. As was the illuminated speedo\’ on the gas tank. And the KJ\’s straight-line stability – thanks to its long wheelbase – would have given ample opportunity to consult said clock. Bill Henderson – the firm\’s founder – must have been proud.

Mercifully – by the time of the Great Depression – Henderson had moved on. Ace was his new venture. The company which bore his name fared badly in the crash. The KJ\’s finery did not come cheap. It had no chance of selling well amidst serious austerity. Henderson struggled on as best it could – but it was always a lost cause. In \’31, Schwinn – the new owners – threw in the towel. With the demise of the KJ, America lost a beautiful motorcycle. Its pinstriping, in particular, was close to perfect. And the rest of the design followed suit. In short, the Henderson KJ was class on two wheels … direct from the USA!