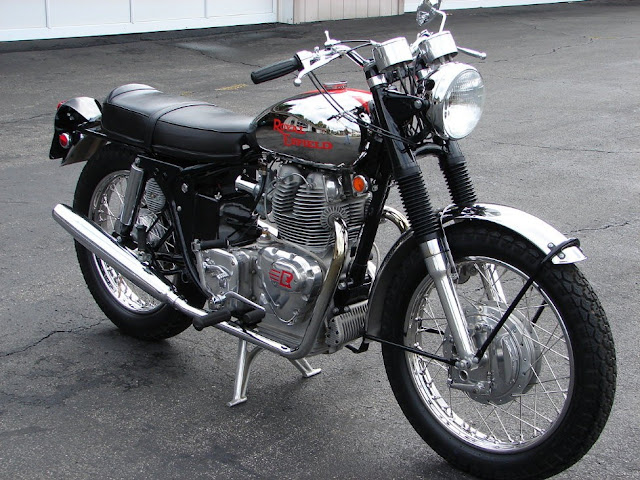 Royal Enfield may not be quite so celebrated as some of its \’Brit bike\’ brethren. Its logo, though, adorned a long line of sturdy, but stylish motorcycles. A perfect example was the Interceptor 750.

Power output for the Interceptor was 53bhp. Revs rose smoothly to 6,000rpm. Those stats no doubt impressed American – as well as British – buyers. Which was good, because the bike – and its 750cc capacity – were largely targeted at the US market. Indeed, the excellence of the Interceptor\’s engine made up for \’deficiencies\’ in other departments. The front brake, for example, was not the most reassuring ever made. And the forks could have been firmer.

Eventually, Royal Enfield suffered a financial meltdown. Sadly, it was one from which it never recovered. The Interceptor range had been in production throughout the Sixties. It might not have been at the cutting edge of Harold Wilson\’s \’white heat of technology\’, but the 750 certainly showcased some of the best of British innovation. After the collapse, the rights to Royal Enfield were licensed to India. In time, the marque became part of the \’retro revival\’ marketing boom. For sure, the Interceptor 750 helped inspire it. Royal Enfield now has the kudos of being the oldest motorcycle manufacturer still shipping product. Long may that continue!