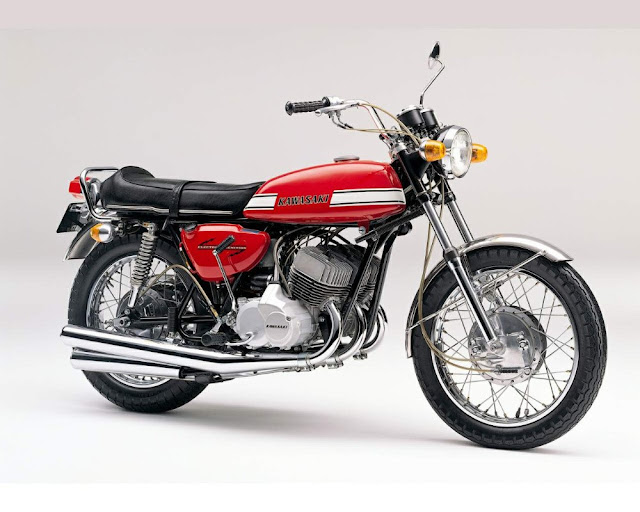 Kawasaki built its first bike – a 125cc two-stroke – in 1960. From the outset, Kawasaki was synonymous with high-performance sports bikes. Bikes like the H1, for instance. Technically, it was released at the tail-end of the Sixties. But, it is one of those machines which make lovers of Seventies superbikes come over all misty-eyed. That was the decade in which the H1 was most often seen – being ridden hell for leather – along the highways and byways of Britain. And, indeed, other locales – usually in the same high-spirited fashion. It was what two-strokes were made for, basically. And, if the H1\’s handling was a bit imprecise – at least as compared with bikes of today – hey, it only added to the fun!

The H1\’s 500cc three-cylinder engine output 60bhp. The \’stroker\’ motor screamed all the way to a top speed of 120mph. It did so in a way that induced mile-wide eyes – and smiles – in those brought up on a strict \’Brit bike\’ diet. Heck, the sound alone was worth the asking price! The H1\’s slimmed-down weight of 383lb only added to its searing acceleration. Revs peaked at 7,500rpm – with a noticeable surge as they hit the power band.

Kawasaki\’s first forays into motorcycle manufacture had been influenced by BSA. By the time of the H1, though, the Japanese giant had forged its own style. Middleweight though it was, the H1 passed muster among the big Seventies \’muscle bikes\’. Naked aggression more than made up for its diminutive dimensions. The Kawasaki H1 hurled bodies and souls into two-stroke hyperdrive. Some \’70s bikers never fully recovered!