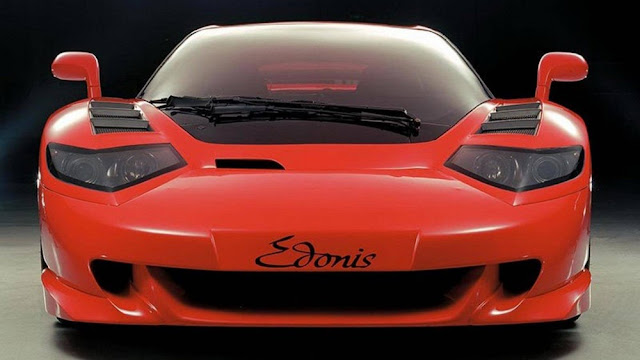 B Engineering began as an offshoot of Bugatti – when the latter went bust, in \’95. A small group of ex-Bugatti staffers banded together to create their own take on a supercar. Not just any old supercar, mind – a one-of-a-kind supercar. Enter the Edonis! Arguably, the best tagline a car could have would be \’Made in Modena!\’ Certainly, the Italian city is now synonymous with automotive excellence. B Engineering never used that slogan. But – while \’B Engineering\’ may not have quite the same cachet as \’Ferrari\’ – it can still hold its own in high-calibre company.

\’Edonis\’ is Greek for pleasure. In the case of a supercar, the kind of pleasure that 720bhp generates. It came courtesy of a twin-turbocharged V12 engine. The Edonis\’ top speed was 223mph. No surprise, then, that it broke the lap record at the Nardo racetrack. When it came to the car\’s colossal power output, every other component was clearly supremely in sync with it. Edonis project director Nicola Materazzi led a crack team of engineers. Between them, they had worked for all of the top supercar marques. Jut 21 Edonis units were built. The figure referenced the 21st century.

B Engineering\’s links with Bugatti stayed strong. Its owner – Jean-Marc Borel – had been Bugatti\’s vice chairman. 21 carbon-fibre tubs – originally earmarked for the Bugatti EB110 – were duly used for the Edonis. The latter\’s 3.7-litre engine was developed from that of the EB110. It was hooked up to a 6-speed gearbox. The Edonis cost a cool £450,000 – from a manufacturer without a proven pedigree. Those in the know, though, did not baulk at the price. After all, the crème de la crème of the car industry had contributed. For the B Engineering Edonis, then, quality was never going to be an issue!