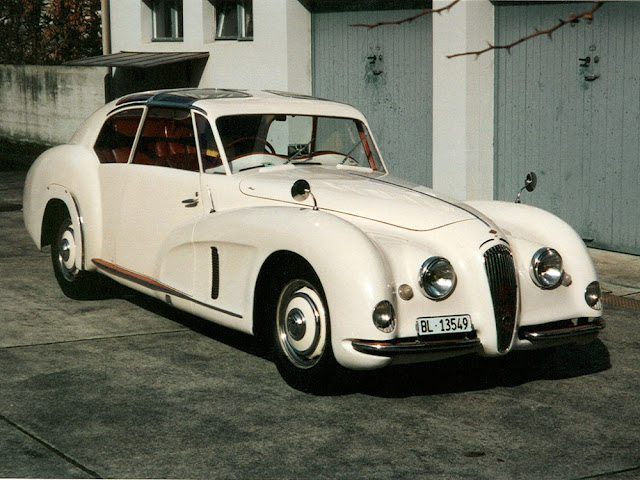 Walter Köng\’s Riley 2.5 Saloon was unique. That made sense – since it was a solo effort. Well, apart from the engine. All other aspects of the car were overseen by Köng. No wonder, then, that it took him 5,000 man-hours – or two years – to complete.

Köng was Swiss. In \’45 – with the war only just over – not a huge amount was happening in his native land. Switzerland\’s key industries – textiles and clock-making – were having a tough time of it. Köng was well-versed in all things automotive. He had worked at Sala, in Italy – as well as French firm Gallee. Oh, not forgetting Chrysler and Packard. With the fighting now finished, Köng was hankering to get back to work. With Swiss manufacturing still in the doldrums, he decided to take things into his own hands. Köng would build his own car!

Köng\’s inspiration came in the form of aircraft. Specifically, fighter planes. That was hardly surprising – since he had, after all, seen a few in recent times. The design brief was radical – especially for someone putting it into practice himself. Bodywork would be aluminium. The roof would be a two-panel, removable affair. In truth, Pontiac and Ford had already pioneered that set-up. What they had not pioneered were mahogany bumpers. They came courtesy of Köng – and his fertile imagination. Eventually, the time came when all the car needed was an engine. A Riley 2.5 was duly sourced and installed. Sadly – after so much effort – Köng\’s project was not to be a lucrative one. While his work appeared at \’49\’s Geneva Motor Show – and generated a good deal of interest – no sales materialised. But, all was not lost. The annals of motoring history were another matter entirely. Walter Köng slotted into them with aplomb. To motoring\’s cognoscenti, he was now a kingpin of bespoke car-builders. The Riley 2.5 Saloon was proof positive of that!