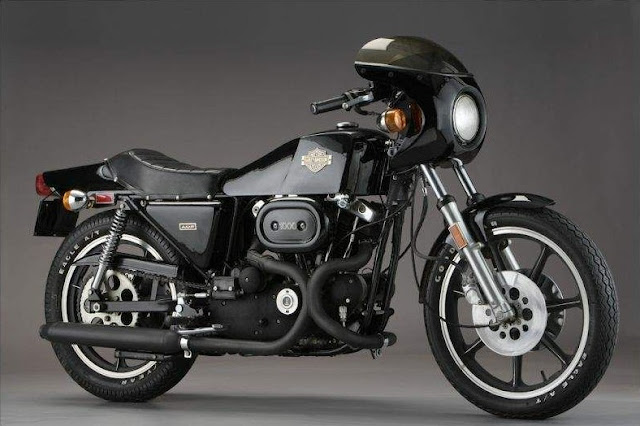 Marketing-wise, Harley-Davidson\’s XLCR fell between two stools. It was neither a full-bore sports tool, nor – in typical Harley fashion – a laid-back cruiser. More than anything – as far as categories went – it was classic café racer. In the Seventies, though, performance was key. That was, after all, the decade of the first wave of Japanese superbikes. There was no way the XLCR was going to compete with them. While its pushrod V-twin engine packed plenty of torque, it was some way off its Oriental rivals at the top-end of the rev range. On the other hand – dramatic though it looked in its jet-black livery – it did not have enough \’attitude\’ chops to keep Harley die-hards happy. As a result, just 3,200 XLCRs were sold.

Willie G Davidson – Harley\’s head of design – had fulfilled his brief. For sure, the XLCR looked the business. From its flat-handlebars fairing – via an elongated tank – to the racy seat/tail unit, the XLCR\’s lines were in all the right places. Certainly, the swoopy siamese exhaust set-up was stunning. Sadly, the XLCR\’s speed stats did not stack up as neatly as its styling cues. A peak power output of 61bhp – at 6,200rpm – did not set any alarm-bells ringing. A top speed of 115mph was average – and no more. Suffice to say, then, that boy racers – of whom there were a lot in the late \’70s – were underwhelmed.

Harley\’s sales brochures, however, took a different tack. They pointed to the fact that the XLCR\’s performance was a marked improvement on what had gone before. Up to a point, they were right. But then, the same could be said of Harley\’s new Sportster. In white knuckle terms, the XLCR did not do much the Sportster was not already doing. And – crucially for a Harley – the Sportster scored more \’sit up and scowl!\’ points. Harley-Davidson was right to try to tap a new trend. But – for two-wheeled speed merchants – the XLCR Cafe Racer simply could not cut the cappuccino!