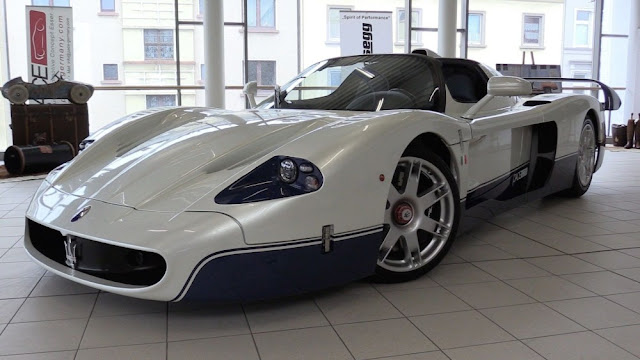 The Maserati MC12 cost £515K. 50 were sold – twice as many as were needed to let the competition version race in the FIA GT World Championship. For your half a million quid, you got a Ferrari Enzo, into the bargain. Well, sort of! Much of the MC12 was based on the Enzo – as a by-product of the Ferrari Maserati Group partnership. Replication ran to the carbon monocoque, V12 engine, steering wheel and windscreen. The MC12\’s 6-litre motor was detuned a tad from that of the Enzo – but still managed to provide a cool 622bhp, at 7,500rpm. Top speed was 205mph. 0-60 took 3.8s.

Remarkably, the MC12 took a mere twelve months to make. Maserati\’s engineers were, of course, aided by the Ferrari Enzo factor. Even so, to take a top-grade supercar from drawing board to production line in a year was impressive, to say the least. Design duties fell to Frank Stephenson. He had previously masterminded the Mini Cooper. In terms of the MC12\’s aerodynamic package, a quick glance told you all you needed to know. Seriously slippery was understatement!

The MC12\’s white and blue paint mirrored Maserati\’s \’Birdcage\’ racers. The Tipo 60/61 machines had competed in sports car events in the early Sixties. The racing theme continued inside. Lightweight carbon-fibre was used for the MC12\’s cabin – including the fully-harnessed seats. Practical problems arose from the rear window – or lack of it! A quick removal of the targa top, though, soon sorted the shortcoming. Other than that rear visibility \’glitch\’, the MC12 was reasonably user-friendly. Sequential gear-changing was straightforward, steering nimble and the ride smooth. The sole issue, then, for owners, was sourcing spare parts. Best way around it was buying a Ferrari Enzo as back-up. Or – better still – two MC12s. Maserati probably preferred the latter option!