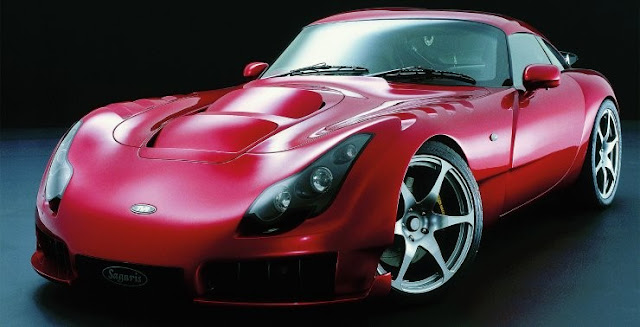 If you bought a TVR Sagaris new, you got a fiver change from £50K. It did not, though, come with any airs and graces attached. Built in Blackpool – on England\’s NW coast – the Sagaris delivered no-frills performance – and plenty of it. No-frills, yes – but not no-thrills. A top speed of 175mph made sure of that.

A swift glance at the Sagaris spoke volumes. The transparent rear wing could not have been clearer … in terms of the car\’s intent, that is. If you were still in doubt, an array of bonnet vents gave the game away. Does a road car need to breathe that deeply? Nikolai Smolenski – TVR\’s new owner – obviously thought so. He was a young Russian oligarch – and was taking no chances. In the past, TVR had caught flak over build quality. To be fair, as a small manufacturer of exotic machinery, it was always a risk. Smolenski, then, opted to up the ante, reliability-wise. How much he succeeded is a moot point. Anyway, a sturdy roll-cage was duly installed – which took care of over-zealous pedal-prodders, at least!

Certainly, the Sagaris\’ straight-six engine called for care. The all-aluminium unit was deceptively pretty. On top of a 406bhp output, it turned over 349lb/ft of torque. As a result, the Sagaris rocketed from 0-60 in 3.7s. 0-100 took just 8.1s. Figures like that mean precision engineering. With a bit of Northern grit thrown in, of course. After all, sports car development is no bowl of cherries! But, while the TVR Sagaris did not stand on ceremony, it was bespoke – not basic!