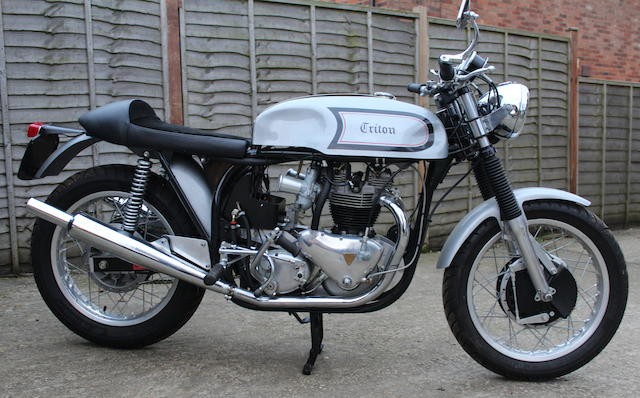 It has doubtless been discussed – in refreshment rooms around the world – which is the greatest café racer ever made. Dave Degens could be forgiven for making the case for the Dresda Triton. His company – Dresda Autos – was based in west London. As well as a race engineer, Degens was a rider of high repute. It followed, then, that he would be on the lookout for high-performance tips and techniques. A logical way to go, in that regard, would be to take a well-sorted motor – and install it in an equally well-sorted chassis. Which is exactly what Degens did. Indeed, since the mid-\’50s, two-wheeled tech-heads had been bolting Triumph engines into Norton frames. The hybrid fruits of their labour were dubbed Tritons. Triumph\’s powerplants were the most potent around, at the time. And Norton\’s Featherbed frame rewrote the rulebook when it came to firm, but flexible geometry.

In the mid-\’60s, Triumph\’s parallel-twin engine layout was cutting edge. The 650 unit was kicking out 50bhp – at 6,500rpm. Top speed was 120mph. Do the café racer math – and that exceeded \’ton-up boy\’ requirements by 20%! And all from an air-cooled four-valve twin. But – as Dave Degens knew only too well – horsepower is only half the equation. Handling, too, needs to be factored in. Cometh the hour, cometh the Featherbed! Norton\’s steel twin-cradle frame had excelled on both road and track. Norton\’s TT rivals could vouch for that! Put it all together – and Triumph engine, plus Norton frame – equalled fast and fluid motorcyling.

By the end of the Sixties, the Triton \’brand\’ had gone beyond its geeky beginnings. The dream ticket – courtesy of Triumph and Norton – now ate a substantial slice of the Brit bike pie. But, \’mass-production\’ for the Triton held a sting in its tail. Downmarket, if not dodgy deals increased – both in parts and build quality. Of course, Dresda Autos – with Dave Degens at the helm – never lowered its standards. Even now – decades later – they provide bespoke bikes to discerning buyers. A legend in the specialist motorcycle world, then, the Dresda Triton took on – and beat – all comers!