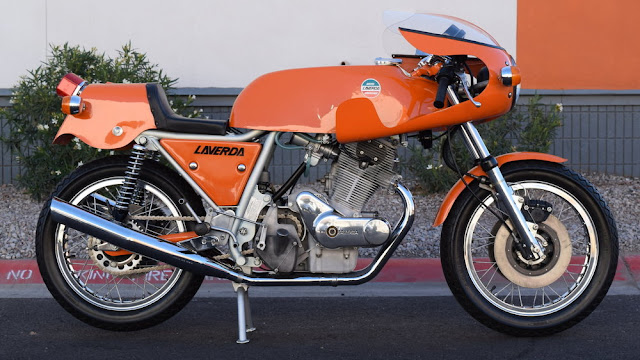 The Laverda 750 SFC was a production racer. Originally conceived to compete in endurance races, it went on to be a shining light on the roads as well. The \’C\’ in its name stood for competizione. While we are at it, the \’F\’ stood for freni, Italian for brakes. That referenced the improved drum sets, with which the SFC came equipped. Ceriani suspension sealed the roadholding deal – telescopic forks at the front and twin shocks at the rear. Always a good sign, the SFC won first time out. That was the Barcelona 24 Hours race – at Montjuic Park, Spain. The bike\’s bright orange paintwork was a cinch to spot, even at night – for both spectators and pit crew alike!

On the road, too, the SFC was a scintillating sight. 549 SFCs followed on from the prototype. A certain commitment was required of the rider – since they were far from \’ergonomically correct\’. Low clip-on handlebars – and rear-set footrests – meant relaxation took a back seat to a racing crouch. And it was a single back seat, at that! At least the SFC\’s smart half-fairing was a concession to comfort – keeping the worst of the wind off. And – certainly in handling terms – the SFC was eminently user-friendly.

Potentially, SFC riders needed all the handling help they could get. The bike\’s parallel twin engine came with high-compression pistons – fueled by 36mm Amal carbs. A close-ratio 5-speed gearbox was fitted. Top speed was 125mph. An injudicious twist of the the SFC\’s throttle, then, and a race-style posture may well have proved welcome. Better a little discomfort than finding yourself lying upside down. The SFC weighed in at just 454lb – but that is a lot to pull out of a ditch! So, the Laverda 750 SFC was a true Seventies superbike. It combined impeccable Italian styling – and the technical wherewithal to keep it that way. Hopefully!