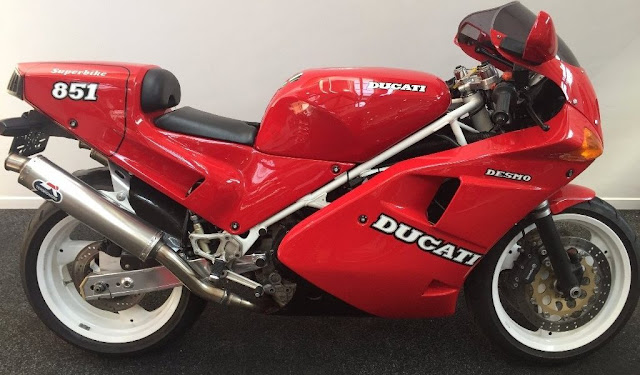 The Ducati 851 was a slow burner. It took a refit for it to really kick into gear. Not that the first model did not have anything going for it. The 851cc engine was sound. Styling was suitably dynamic. Especially the three-tone paint job – in Italian red, white and green. The issue with the first version was its handling. Due to a supply-chain glitch, the bike had been released with 16″ wheels – smaller than planned. The problem was that they were too good! The handling was more nimble, but there was less room for error. When it came to quick cornering – without a high degree of accuracy – the small wheels were liable to \’tuck under\’. A flexible ladder frame did what it could to keep the rubber side down – but there was a limit!

So, Ducati 851 – take 2! This time, a set of 17″ wheels were in situ. Things were looking up already … literally for some owners! The most obvious mod was the paintwork. Gone were the tricolore hues of the original. The new bike\’s livery was still Italianate – but now it was fire-engine red. While there had been cosmetic and cycle part changes, the motor was untouched. Indeed, it had been universally praised. It took Ducati a year to complete the makeover.

The 851 was the start of a new superbike era for Ducati. Its V-twin engine was now liquid-cooled – and came with 4 valves per cylinder. Desmodromic valves, in Ducati\’s case. Its unique set-up saw valves opened and closed by cams alone – as opposed to the standard cams and springs system. Springs are all well and good – but are prone to bounce and go out of adjustment. Its \’desmo\’ valve-train had long been a feather in Ducati\’s cap, powerplant-wise. Plus, Massimo Bordi – Ducati\’s lead engineer – added Weber-Marelli fuel injection to the mix. As a result, torque was significantly increased. At the top-end of the rev-range, 104bhp was now on tap. That meant the 851 maxed out at 145mph. Souped-up Marzocchi shocks sorted the suspension. With the road bike seen to, it was time to call the race department. Three WSB titles on the trot for Ducati duly followed – courtesy of riders Raymond Roche and Doug Polen. Truly, Ducati\’s 851 roadster – and its race-going counterpart – were on top of the superbike world!