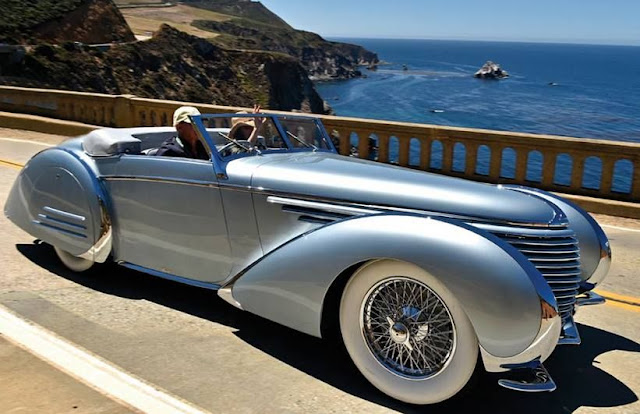 The Delahaye 145 was launched in 1946. The mastermind behind it was Henri Chapron. Born in 1886, he had been on the steel-crafting scene since he was a kid. Come the close of the First World War, he began his own company – in Neuilly, France. Its core business was importing Ford T ambulances from America – and refactoring them into saloon cars! The custom bodies Chapron created were impressive. So impressive, in fact, that he was recruited by Delage.

Chapron\’s entrée to motoring greatness, though, came by way of Delahaye. In the mid-\’40s, streamlining was all the rage. Which was tickety-boo – until the end of the Second World War. By then, even some upper-crust belts were starting to tighten. Streamlining – and automotive haute couture in general – came at a price. If the hooray Henrys could not afford it, sure as heckers like no one else could!

The 145 comprised Chapron bodywork on a Delahaye chassis. Plus, A V12 engine. The resulting coupé was bespoke to its core. Its luscious exterior was matched only by its luxurious interior. It went without saying that leather and walnut abounded. Of course, that fell foul of the current commercial climate. Chapron, though, was tossed a lifeline. This time, Citroën came calling – with the offer of design work. Chapron\’s first brief was a cabriolet – the DS 19. Subsequently, he turned his hand to developing the Citroën SM … always a good career move in France. Indeed, at one point, Chapron was made coachbuilder to the President. Along the way, he helped turn some of Phillipe Charbonneaux\’s dream-laden drafts into roadgoing reality. Chapron\’s last legacy to Citroën\’s oeuvre was the DS 23 Prestige. Always classy, then – never outré – Henri Chapron nailed it as a designer. From young apprentice – to superstar stylist – he was never less than a credit to his profession. The Delahaye 145 was proof of that – alongside many others!