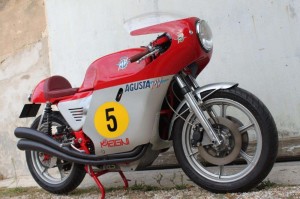 In standard trim, the MV Agusta 850 was a class act. Add to that the Magni factor – and quality increased exponentially. Arturo Magni had managed MV’s racing department. MV took 17 consecutive 500cc World Championships. That told you all you needed to know about what Arturo Magni brought to a two-wheeled party!

In time, Magni turned his attention to roadsters. To that end, he set up his own engineering facility – in Gallarate, Italy. Soon, a steady stream of MV 850s started rolling into his workshop. They did not have far to come. Magni duly introduced them to his own take on engine components and chassis modifications. The Magni effect was marked. A top speed of 140mph was now available. The 850 was weighed down by a bulky shaft final drive. When Magni’s chain-drive conversion kit had been fitted, handling, too, improved. Also key to stability was Magni’s custom-built frame. The single spine original had been replaced by one with two top tubes. Magni’s motor-related mods included uprated cams, high-compression pistons and a four-piece exhaust system. Suffice to say, you could hear it coming a mile away!

The 850 Magni was visibly race-bred. A full fairing – complete with rider number – said it all. The Magni’s stats justified its looks. High-grade parts – from Marzocchi, Koni and Brembo – added further fuel to the performance fire. Arturo Magni – following on from his high-calibre racing exploits – had slipped seamlessly into the world of road-oriented specials. High price tags came with the territory. But – for those with the disposable – MV Agusta’s 850 Magni was the pinnacle of hand-built pedigree!