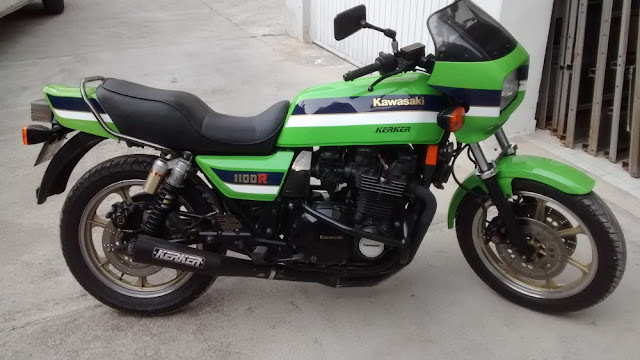 Over the years, many a motorcyclist has had a special place in their heart for a Kawasaki \’Z\’. No bike more so than the Z1100R. No flimflam or finery – just straightforward, sit up and beg-style solidity. Highish handlebars, stepped-down seat and anatomically-correct footrests. In other words – a normal riding position. \’The way bikes used to be\’, you might hear it said. And – after a hundred plus miles in the saddle – who could argue?

Not that that should suggest any kind of staidness! There was little sober or solemn about the 1100R. It was, after all, inspired by a US Superbike racer. The one on which Eddie Lawson won consecutive titles in the early Eighties. Hopefully – from a Kawasaki marketing viewpoint – some of the spirit of the race bike rubbed off on the roadster. Certainly, it was far from unknown for an 1100R rider to feel like Eddie Lawson! And – to be fair – the Z\’s 140mph top whack was more than enough for most mere mortals. Especially when the high-speed wobble kicked in – on account of the bike\’s bikini-type fairing. The R\’s 1,089cc engine made 114bhp. Thankfully – with all that power to play with – the bike was blessed with good roadholding. Squat dimensions helped – as did Kayaba remote-reservoir rear shocks.

Albeit in a no-frills way, the Z1100R was still a stylish motorcycle. Few paintjobs are as emotive as those of Kawasaki\’s \’green meanies\’. Of course, green bikes are considered unlucky by some. That said, owners of spanking-new 1100Rs were obviously prepared to take a chance. For the superstitious, though, other colours were also available. Launched in \’84, the Z might be said to have straddled classic and race-rep. To wit, comfortable ergonomics – plus searing speed and cute handling. Fans would argue, then, that with a lime-green Kawasaki Z1100R, you got the lot. Now, that can hardly be considered unlucky!