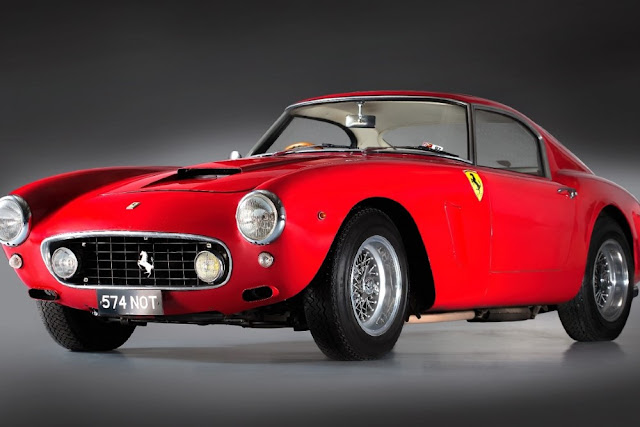 The Ferrari 250 GT was the base model for the most expensive car ever made. That was the Ferrari 250 GTO which sold at a Sotheby\’s auction for silly money. Actually, $48.4m – in California, in 2018. It is easy to see where the GTO got its chops from. In the case of the Berlinetta, bodywork was by Scaglietti. He styled the 250 GT-based competition cars – and their sports siblings. The \’short wheelbase\’ SWB, for instance, fell within his remit. Pininfarina helped sort less race-oriented versions of the 250 GT – like the \’long wheelbase\’ LWB. Felice Boano – celebrated Italian coachbuilder – likewise contributed to the GT\’s design.

The Berlinetta was launched in \’61. It was not just its looks that came out of thè top drawer. Its 3.0-litre V12 motor was also hand-crafted. The man responsible for it – Gioacchino Colombo – was an industrial designer at 14. When most young men his age were gluing pictures of cars to bedroom walls, Colombo was engineering them. Suffice it to say, then, he was a child prodigy. At one point, he drafted a supercharger for homework – as you do. Subsequently, it was shown to Alfa Romeo. Alfa must have graded it A+, since he was offered a job on the strength of it. Several engines later, Colombo was approached by one Enzo Ferrari. The maestro was managing Alfa\’s race department, at the time. By then, Colombo was aged 34.

When Enzo set up his own car company, Colombo was one of his first hires. The motor man arrived in Modena in \’45. Whereupon, he set about adding his own input to the 250 GT project. With such a wealth of design talent dedicated to it, it is little wonder the GT soared to the heights it did. In short, Ferrari\’s 250 GT Berlinetta SWB was as iconic as a sports car gets. Apart from the Ferrari 250 GTO, of course. Sorry, Sotheby\’s!