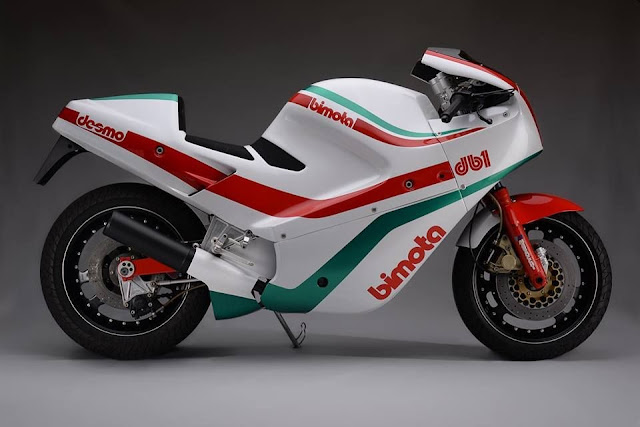 The Bimota DB1 was a double dose of Italiana. It was the first Bimota to feature a Ducati engine. So, the DB1 combined a deliciously torquey powerplant with the kind of looks that could only have been modelled in Italy. Bimota was based in Rimini. Unsurprisingly, then, the DB1 sold well. It came at a critical juncture for the stylish Italian specials builder. Design-driven to its core, business was never Bimota\’s strong suit. Indeed – prior to the DB1\’s \’86 release – the firm was in financial decline. Thanks to the new bike, though, Bimota\’s downward spiral was stemmed – and even reversed. Crucially – along with its long list of virtues – the DB1 was reasonably priced.

The Ducati factor in the DB1 was its desmo-valved engine. A sohc 90° V-twin, the 750cc motor made 76bhp. Built more for mid-range grunt than throttle-to-the-stop velocity, top speed for the DB1 was 130mph. In superbike terms, that stat was not too much to write home about. The way it was reached, however, most certainly was. Suffice to say, acceleration was fierce. As well as its long-stroke motor, the rest of the DB1\’s tech-spec further fueled its free-revving fire. For a start, it weighed a skeletal 354lb. Plus, Federico Martini – Bimota\’s lead engineer – blended the fairing, tank and seat into a single, streamlined shape.

Acrobatic handling was only icing on the DB1 cake. Suspension was by Marzocchi. Brakes by Brembo. Pirelli brought low-profile tyres to the DB1\’s bend-swinging party. They were fitted to nimble 16″ wheels. The whole bike was comfortabe and compact. It is true that at peak revs, the new Bimota was not the most blistering bike on the block. But, for its overall strengths – and the Italianate cut of its jib – the DB1 takes its place at superbikes\’ top table!