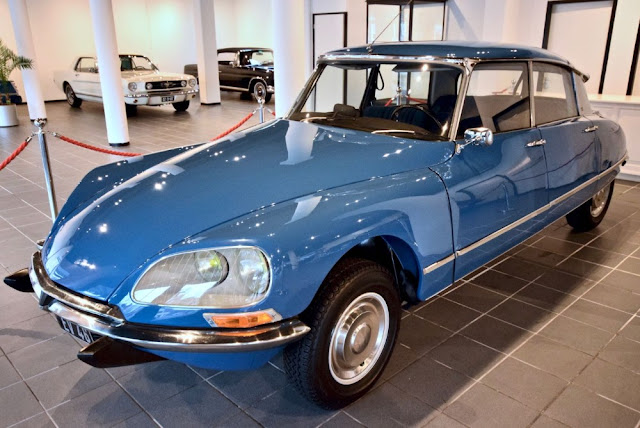 From an engineering perspective, the Citroën DS must be one of the most exciting roadsters ever built. Its 4-cylinder engine powered a hydraulic system – which found its way into just about every part of the car. The motor itself was straightforward – dating back to the \’34 \’Traction-avant\’. But, the hydraulic set-up it sparked into life was revolutionary. Most notable was the suspension. Instead of springs, the \’DS\’ was fitted with \’self-levelling hydropneumatic struts\’. As a result, the car was able to raise and lower itself in a way that had never been seen – or felt – before. Potholes and bumps were easy pickings for the DS. When stationary – with the engine switched off – the Citroën sank serenely down. The power steering, disc brakes, and \’clutchless\’ gearbox were all hydraulically-operated. In each case, performance was substantially improved.

At its Paris début – in \’55 – the DS\’ avant-garde styling went down a storm! The fluid lines of the bodywork were – and are – unique. They were functional, too – cleaving cleanly through French air. Front-wheel-drive, the DS handled well. But, to custom coach-builders – like Henri Chapron – the standard car was just a jumping-off point. They created coupés and stretched limos – taking DS aesthetics to the next level.

The DS set a trend for Citroëns. The ID19, and D Super became stalwarts of the Paris taxi scene. Sprawling Safari Estates ferried many from \’A to B\’. The convertible version looked stunning – and had a price tag to match. The last of the high-end derivatives was the DS23. With a 5-speed \’box – and fuel injection – it delivered 117mph. In the end, almost 1.5m DSs were sold … a fittingly high figure for a fine product.