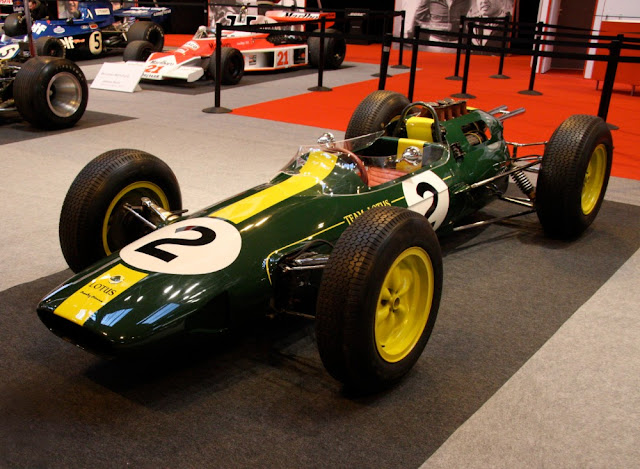 The Lotus 25 was all about innovation. It was designed by Colin Chapman – charismatic top man at Lotus. In a quest to lower the nose of the car – in the interests of aerodynamics – Chapman envisioned a one-piece chassis. The previous car – the Lotus 24 – had been built around space-frame steel tubing. That was the standard, in \’61. The \’25\’, though, allowed its aluminium shell to act as the frame. Not only was the \’monocoque\’ lower and narrower – it was stronger and lighter, too. Frame flex was substantially reduced. That also let the suspension function to better effect.

Chapman boxed clever! The \’62 season started with the old Lotus 24 on the grid – complete with its space-frame chassis. Early, non-championship races were a perfect opportunity to pull the wool over rival teams\’ eyes. Come the Dutch GP, though – and the Lotus 25 was revealed! With master craftsman Jim Clark at the wheel, the new Lotus quickly established itself as the class of the field. It would have won the World Championship at the first time of asking – were it not for last-round reliability issues. The following season, though, saw no such slip-up. A record-breaking seven-win haul saw Lotus take its first world crown. They would repeat the feat, in \’65 – with the wider-wheeled \’33\’. That was a great year for the Norfolk-based team … Lotus also won the Indy 500!

The synergy, then, between the 25 and Clark was an automotive marriage from heaven. They lit up the F1 1.5-litre era. Colin Chapman – the arch-innovator – had done it again. Chassis and frame technology had morphed into the modern era. GP cornering would never be the same again!