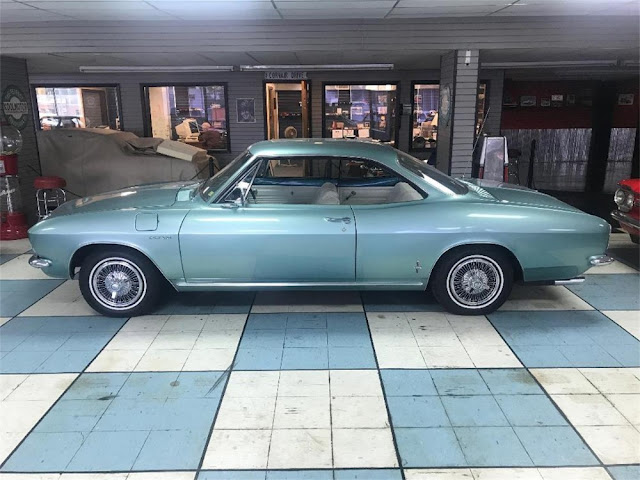 Sadly, the Chevrolet Corvair did not deliver on its potential. That was down to the fact that it garnered a reputation for oversteer. Pro motoring whistle-blower Ralph Nader pounced all over the Corvair\’s alleged defects. They lay, he said, mainly in the handling department. Nader duly detailed them in his book Unsafe At Any Speed. This was a tract devoted to automotive health and safety. His words were diligently read by American drivers – and the Corvair\’s fate was sealed. A \’64 revamp – with revised rear suspension – was a last-ditch attempt to rid the Chevy of its wild child image. It did not work.

Certainly, though, the Corvair got a tick in the box marked technical innovation. For a start, it featured a rear-mounted flat-six engine. Also, its suspension was fully independent. Throughout the Sixties, several versions of the Corvair were released. As well as a sporty coupé and stylish convertible, there was a turbo-charged model. The latter produced 180bhp. Which gave a top speed of 105mph.

Chevrolet designed the Corvair to take the fight to cheap European cars, flooding into US showrooms, at the time. It was marketed as \’compact\’ – though that was more by American than European metrics. Size-wise, it was similar to the British-made Ford Zephyr. Styling-wise, though, the Corvair\’s restrained lines were cut from distinctly European cloth. More so than most of its American siblings, anyway. Indeed, Chevrolet went so far as to dub the coupé version, the Monza. And, the Corvair would go on to influence the Hillman Imp and NSU Prinz. Over a million Corvairs were built. It should have been more. Those misgivings about handling never quite subsided. As a result, \’64\’s Ford Mustang galloped ahead, in sales terms. So far as American automobiles were concerned, however, the Chevrolet Corvair blazed a perfectly-formed trail for European-style sophistication.