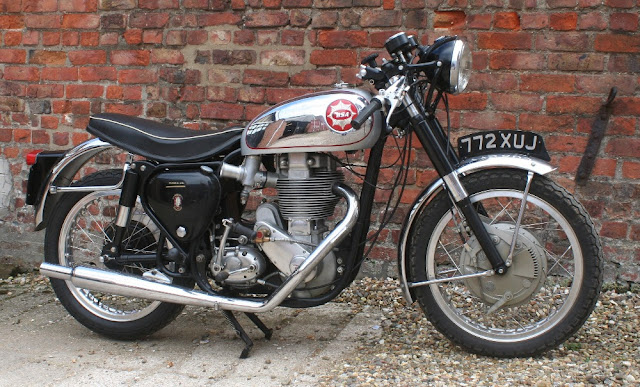 In a hit parade of the best all-time classic motorcycles, the BSA DBD34 Gold Star would be in with a bullet. And of the plethora of bikes produced by the \’Birmingham Small Arms\’ company, the Gold Star went straight to \’number 1\’. The \’Goldie\’ wrote the book on classic bike charisma. Its name was a tribute to Walter Handley\’s 100mph lap of the UK\’s most famous banked oval racetrack. Handley was awarded a Brooklands Gold Star, for his high-speed trouble.

The Goldie was a great-looking machine. Race-style, clip-on \’bars crouched over a chrome tank – emblazoned with the Gold Star badge. Below, focus flowed from a gaping Amal carburettor – through the finned cylinder-block – to a stylish swept-back pipe. Such visual extravagance was matched technically. The Gold Star roadster had a straight-line speed of 110mph.

In sporting terms, the Gold Star was a versatile competitor. It shone not only in road racing – but in motocross and trials, too. \’56 saw the bike\’s stellar début – at the Isle of Man Clubmans TT. The BSA DBD34 Gold Star was a café racer dream come true. Fast-forward a few decades … and there is many a classic motorbike fan still dreaming!