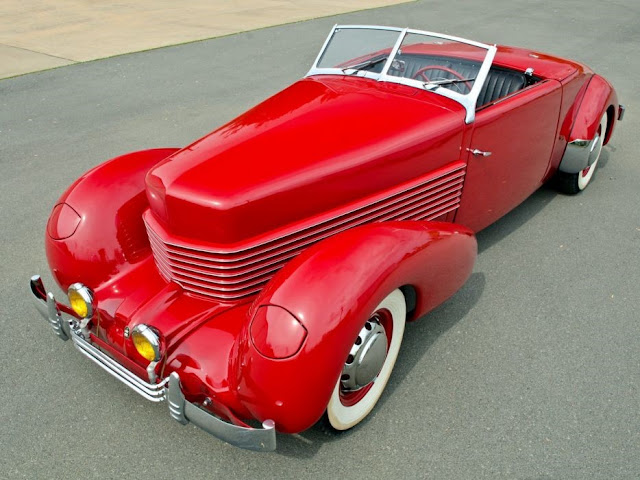 Errett Cord was a man on a mission. To get rich – or die trying! Maverick to his core, cars were one of several saucers he was spinning. Cord may not have loved cars unconditionally – but he sure as heck loved selling them. Cars like the Cord 810, in fact.

By \’29, Cord had already acquired Auburn and Duesenberg. In due course, he returned both of them to profitability. Time, then, for him to start up his own company. The first model off the line was the Cord L-29. It featured a Lycoming engine and front wheel drive. The motor was not much to write home about. But the FWD most certainly was. Indeed, Miller racing cars were fitted with it. As a result, they were leaving rivals languishing in their wake. Cord decided he could use some of that. Sadly, its FWD was not sufficient to make the L-29 a commercial success. It was held back by its high price and transmission issues. As well as the mediocre motor!

The Cord 810 was launched at the NY show – in December \’35. Its unique selling point – FWD – had been upgraded. More to the point, powering it was a new V8. With the optional supercharger, it produced 190bhp. That gave a top speed of 110mph. Gear changes were electric – literally. A small lever activated cog-shifting solenoids. The 810\’s innovative engineering allowed for radical styling. Its unitary construction – with no separate chassis – let Gordon Buehrig design a \’low rider\’ profile. Headlights blended in with the fenders – enhancing the car\’s clean lines still further. Inside, too, the Cord cut a dash. Its instrument panel looked as aeronautical as it did automotive. A convertible, phaeton – and two sedans – were on offer. But – even with so much going for it – the 810 did not overburden the showroom tills. To be fair, the Great Depression was not the ideal time to launch a new car. Plus, Errett Cord had other things on his mind. His ‘creative’ business practices attracted attention – some of it from financial regulators. As a result – in ’34 – Cord sought a safe haven in England. With its erstwhile captain no longer at the helm, the good ship Cord was cut adrift. In ’37, it sank without trace. For all that, the Cord 810 – and its 812 successor – had well and truly made their mark. In the annals of avant garde design, that is. Alas, not at the cash registers!