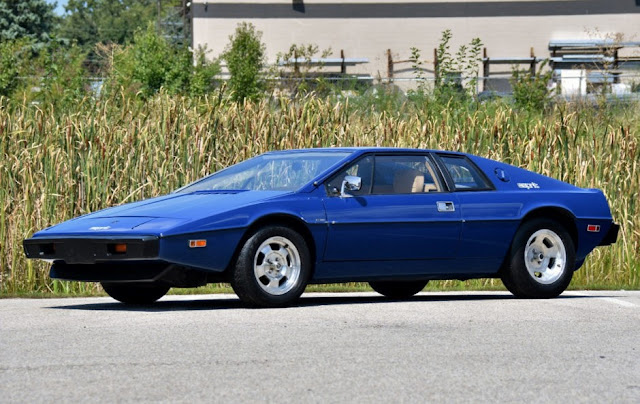 The Lotus Esprit S1 was the product of a more than fertile mind. \’Genius\’ is not a word bandied about in the car world so much as in certain other sectors. Most notably, Art and Science. But, automotive design straddles both disciplines. Someone in motoring to whom the tag has been applied is Colin Chapman – founder of Lotus Cars. Chapman was as enigmatic as they come. He could also be controversial – in a way only the seriously single-minded can be. What was never in doubt was that Chapman lived for Lotus. And for cars like the Esprit.

The Esprit S1 prototype was styled by Giorgetto Giugiaro. It was a futuristic fantasy … albeit, one built in rural Norfolk! Hethel has long been the home of Lotus – both physically and spiritually. Technologically, the Esprit was impressive. Its 2-litre 4-cylinder engine produced 160bhp in European spec. Its central location spread out the mass loads – helping the car handle. A Lotus maxim was \’Performance through light weight\’. To that end, its bodywork \’wedge\’ was made from glass-fibre.

Chapman\’s mission statement was to create cars he himself would want to own. A supercar of its day, the Esprit was nothing if not head-turning. Styling-wise, it summed up the Seventies … teetering, as it did, on the brink of kitsch – but backing up in the nick of time. The Lotus Esprit S1 was glamorous, mercurial – and an all-round class act. Just like Colin Chapman, in fact!