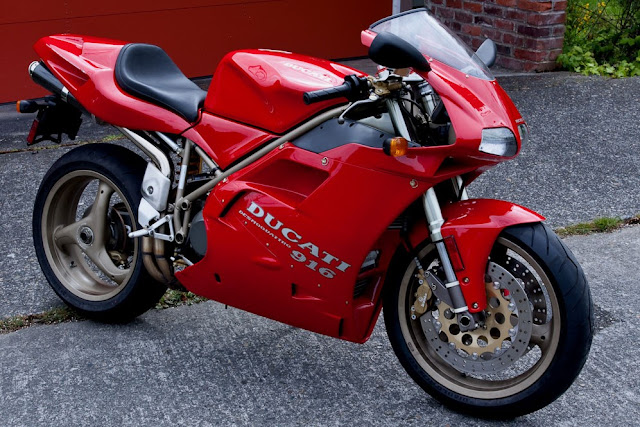 The Ducati 916 took motorcycle visuals to another level. It is ranked among the most beautiful bikes ever built. Launched in \’94, its designer was Massimo Tamburini. He had been a co-founder of Bimota – specialist builders extraordinaire.

Tamburini\’s trademark styling cues were all over the 916. From its seductive snub nose – through the curves of its bodywork – to its pert tail-piece and silencers. It was so slim, it was scary! The tubular steel frame was not one millimetre wider than required. The 916 weighed in at just 429lb … absurdly light for a bike of its size.

Engine-wise, too, the 916 scaled heights. Its torque-laden 90° V-twin made 114bhp. Top speed was 160mph. The 916\’s chassis/suspension geometry absorbed corners. Lean it as far as you dare … you would not find its limits. The bike\’s single-sided swing-arm said it all – both technically and aesthetically. As you would expect, such a classy package was a raging success, in the showrooms. When it came to the Ducati 916, Tamburini broke the motorbike mould!