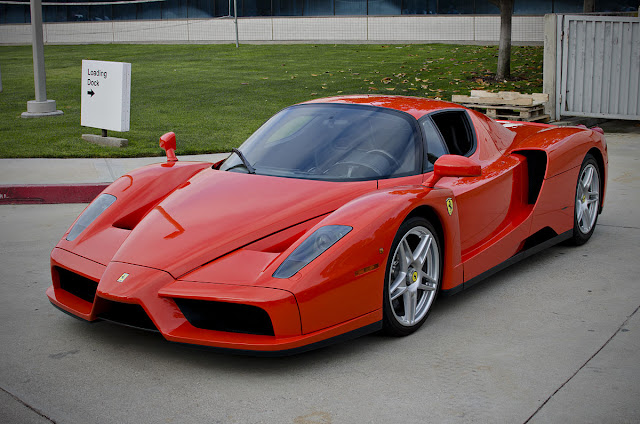 Technically, the Ferrari Enzo was a roadster. And technically was about as far as it went. Red-blooded racing ran in its veins. Its name alone told you all you needed to know. Founder of the myth that is Maranello – and its most famous firm – Enzo Ferrari\’s legacy is secure. \’Professor\’ Alain Prost – French F1 legend – once said he did not know why racing drivers do what they do. Cars like the Enzo – with its 660bhp power output – probably provide a few clues!

There were strong links between the Enzo and the Ferrari F1 car at the time. Its CFC/Nomex body panels, for starters, bear a striking resemblance. Beneath those panels sat a carbon-fibre monocoque – similar, again, to that of the GP car. Even the Enzo\’s V12 engine was cut from the same F1 cloth … in terms of layout, at least. On the underside, huge venturis mimicked \’ground effect\’ – the set-up by which GP cars stay \’glued\’ to the tarmac. The Enzo was even equipped with \’active aerodynamics\’ – a system not too far removed from that of the top-flight competition cars. Its brake discs were carbon-ceramic composites … of course!

To match the Enzo\’s tech spec visually, then, was always going to be a challenge. Pininfarina, though, stepped up to the plate. The great Italian design house had long been associated with the Ferrari marque. They fulfilled the Enzo brief to perfection – supplying carbon-fibre solutions, inside and out. Ferrari, however, had issues when the car went on sale. Not because of any problems with the product. Indeed, just the opposite. So sought-after was the Enzo – even with its £425,000 price tag – that all 349 units sold out within hours. To try to placate frustrated would-be buyers, Ferrari scaled the number up to 400. It is unlikely that was enough. One of the most finely-wrought supercars ever made, the Ferrari Enzo was a fitting tribute to the man who inspired it!