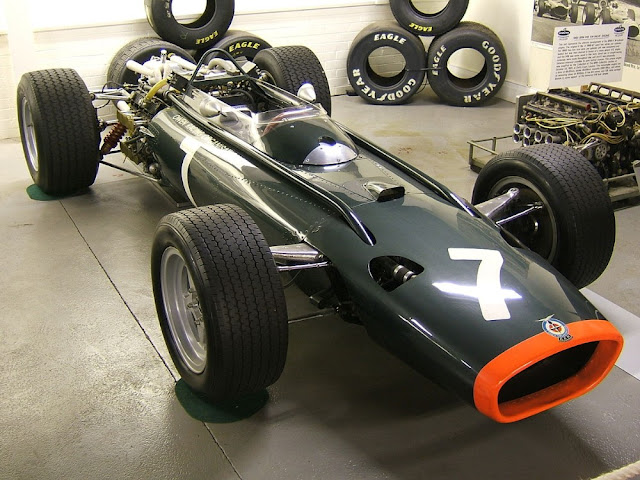 The BRM H16 was far from F1\’s most successful machine. But, it was one of the most unusual. And while points are not awarded to the most interesting cars, without them motorsport would be the poorer. For example, how about producing a V16 – conforming to F1\’s new 3.0-litre size limit – by linking two 1.5-litre V8s? That is precisely what Tony Rudd – BRM\’s engine designer – opted to do. Not the first idea that might pop into an F1 fan\’s head, perhaps – but, it was a logical step. After all, BRM – British Racing Motors – already had said V8s at its disposal. All Rudd had to do was shorten them a tad, place one on top of the other – and marry them up. Unfortunately, Rudd was not in a position to rid the engine of its excess weight.

Rudd was inspired to build the V16 by Napier Dagger\’s H24 aero engine. Rudd reckoned it was good for 600bhp, fully developed. Later, he would say he wished he had gone down the 12-cylinder route instead. But at the time, 16 cylinders seemed like the way to go. Gremlins got in from the get-go. Vibrations would be ironed out in one part of the engine … only to re-appear in another! The upshot was that the H16 car did not make it onto the grid until the end of the \’66 season. Reliability was duly improved For \’67. Unfortunately for BRM, it came at the expense of power.

The H16\’s P83 chassis did not help. Like the engine it supported, it was heavy. A lighter 115 chassis replaced it – but that, too, was substantially heavier than its rivals. Jackie Stewart was a BRM driver, at the time. He did not exactly gush with praise for the H16. Its performance limits were too easy to find, he said. That made it hard for a driver to shine – even one of his calibre. At least the more challenging tracks – like Spa Francorchamps and the Nürburgring – levelled the F1 playing-field somewhat. The H16 motor did win a GP, though. However, it needed Lotus\’ help to do it. In \’66 – while awaiting delivery of the Ford DFV motor – Colin Chapman hired the H16 engine to power the Lotus Type 43. Ironic, really, given Chapman\’s obsession with weight-saving. Heavy as the H16 was, Jim Clark eased the Type 43 to victory – at Watkins Glen, USA. And in \’67 – for all his dislike of the H16 car – Jackie Stewart placed it second at Spa. And that was pretty much it, in terms of results. A real racing oddity, the BRM H16 made for great spectating. Driving it, on the other hand – as Stewart pointed out – was not always quite so much fun!