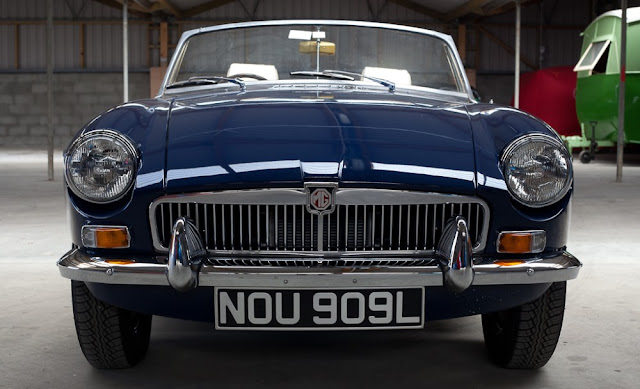 Among other cars, footballer George Best drove an MGB. A man synonymous with style – in both the Sixties and Seventies – he doubtless took the odd Miss World or two out for a spin in it. He would have needed to watch out, though, for his glamorous passengers. The MGB\’s handling was no match for Best\’s dynamic dribbling! Suspension and steering parts – as well as its live axle – were stock BMC items. In other words – manoeuvrability-wise – they were nothing to write home about. In a straight line, however, things MGB were much improved. Top speed was a creditable 106mph. With the top down, Best – and his busty companions – would certainly have felt the breeze blowing through their Vidal Sassoon-sorted locks. At one point, more than 50,000 MGBs per annum were passing through the Abingdon factory gates. Add another nought to that figure, and you have total sales for the MGB. More than half a million were shifted – between \’62 and \’80. Numbers like that make it one of the best-selling sports cars ever!

Safe to say, then, the MGB\’s success was due mainly to its lithe good looks. Technically, it was no great shakes. Nonetheless, it was an improvement on its predecessor. The MGA\’s hefty separate chassis had been ditched – hopefully, not literally – for a lighter unit-construction item. The MGB scored well, too, in terms of torque. There was a rip-roaring 110lb/ft of the stuff – and at just 3,000rpm.

It was in the design department, though, that the MGB shone. Its seductively low lines were drawn with stunning simplicity. The car was inherently aerodynamic. Were it not for its small-scale four-cylinder engine, it would have gone a whole lot quicker. For a sports car – even in the \’60s – 95bhp was no more than middling. That said – taken in the round – the MGB embodied the best of British motoring. Obviously, Georgie thought so – or, he would not have spent his hard-earned money on one. No doubt, Miss World agreed. End of the day – if it was good enough for the Belfast boy – it must have been the best!