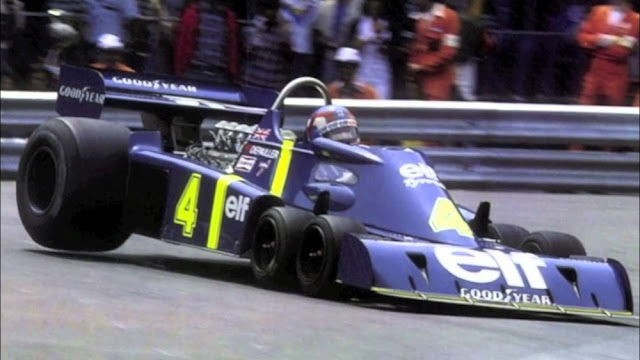 To have described the Tyrell P34 as radical would have been understatement. After all, six-wheeled cars are not exactly two a penny – on road or track! Over time, other F1 constructors would also try six-wheelers on for size, however – so Tyrell cannot have been that far out on a limb. Derek Gardner designed the car. His primary aim was to reduce frontal area. Four 10″ front wheels helped do just that. The wheels and tyres on Formula 1 cars do tend to be rather large, do not forget! The result was more than merely improved aerodynamics – deeply desirable though that was. Grip, too, was substantially upped – especially on turn-in to corners. Having four front wheels took the P34\’s traction to a new level. Aesthetically, it may have been open to doubt. Functionally, though, there was no doubt at all.

The \’P\’ in P34 stood for Project. To begin with, it was to be no more than a prototype. Boss Ken Tyrell was dubious that the car would make it from test-bed to race-track. But when the \’project car\’ was put through its paces, it was found to be formidably quick. Quick enough, in fact, to give the then current car – the Tyrell 007 – a run for its money. Ken Tyrell\’s reservations rapidly vanished. A no holds barred racer was duly green-lighted.

The P34 took to the grid in \’76. By season\’s end, the car had fully justified the faith placed in it. In the constructors\’ championship, Tyrell was bested by only Ferrari and McLaren. In the drivers\’ title chase, Jody Scheckter and Patrick Depailler placed third and fourth respectively. Scheckter took pole, then won in Sweden – with Depailler not far behind. There would be several more second-place finishes. Two fastest laps had been bagged – Scheckter\’s in Germany, Depailler\’s in Canada. So, things looked good for \’77. Ronnie Peterson replaced Scheckter. Sadly, though, P34 momentum was not maintained. Tyrell lagged behind in development terms. Tyre supplier Goodyear had issues of its own. It was facing stiff competition from Michelin. The P34\’s one-off tyre requirements were becoming a drain on Goodyear resources. It soon became clear that the end was nigh for the P34. Both March and Williams subsequently toyed with six-wheelers. They were both stymied by transmission issues. In due course, six-wheeled systems would be banned. During its brief time in the sun, however, the Tyrell P34 was on the front foot in pushing F1\’s technical envelope!