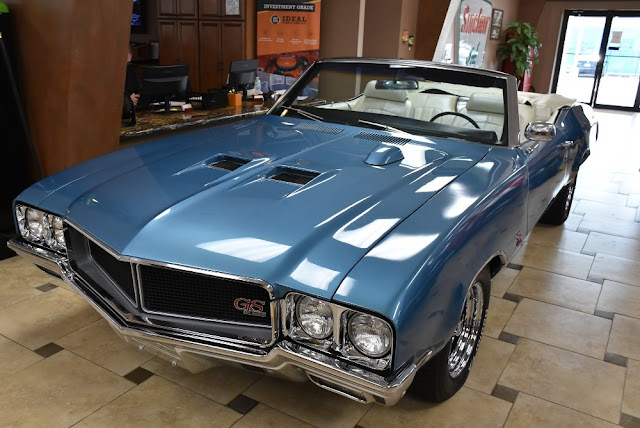 The Buick Gran Sport had Pontiac to thank. The latter\’s GTO was the first muscle car. As such, it saw a big-block V8 fitted in a medium-sized chassis. The result was hard-punching power – at a competitive price. Not surprisingly, then, the GTO sold well. Again, not surprisingly, Pontiac\’s rivals picked up on the fact. The muscle car era was born.

One of those rivals was Buick. In \’65, they took their \’Skylark\’ car – and mated it with their 401ci \’nailhead\’ V8. As a consequence, the Skylark\’s output soared to 325bhp. While the Skylark \’Gran Sport\’ never played in the same sales league as the GTO, it nonetheless did good business for Buick. In \’66, they followed it up with a more powerful Gran Sport. It now kicked out a cool 340bhp. Sales, though, were down on its first year. Attractive as it was, a brand-new Buick did not come cheap! So – in \’67 – the \’GS\’ 400 was launched. A 3-speed auto transmission appeared. As an alternative, Buick offered the budget GS 340. Sales started to climb again.

The Gran Sport\’s finest hour came in the form of the GS 455. Released in 1970 – complete with a 355ci engine – oomph was nominally upped to 360bhp. However, Buick were almost certainly underestimating it. Road testers swore it felt more like 400bhp. At any rate, it was in \’Stage One Special Package\’ tune. That comprised a hotter cam, larger valves, and a modified carb. With all that hooked up, the Gran Sport was good for 130mph. Exotic \’GSX\’ styling options went toe to toe with the performance stats. Spoilers, stripes and supersize tyres made the GS 455 look as well as it went. Sadly, all good things come to an end. As soon as \’71, the Gran Sport\’s best days were behind it. Low-lead gas led to less power. Insurance hikes kicked in, too. One way or another, the muscle car game was up. Like its power-mad siblings from other marques, the GS simply faded away. Times change – and the world moves on. But – like everything else – progress comes at a price. In automotive terms, that meant cars like the Buick Gran Sport. For – despite all their foibles – driving has never been quite the same since!