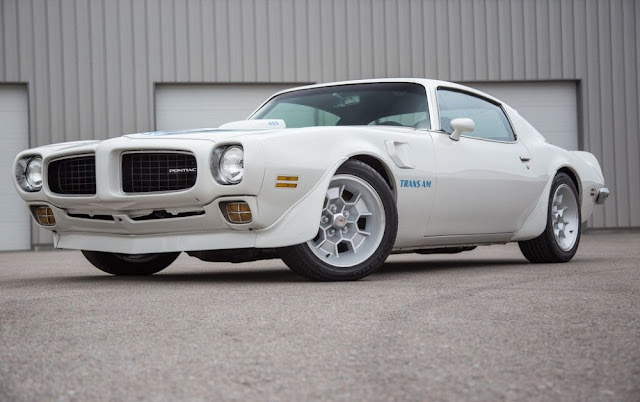 The Pontiac Firebird flew onto the American car scene in February, \’67. Released at the same time as GM\’s Chevrolet Camaro, they were two peas from the same \’pony car\’ pod. The most iconic early \’Bird was the \’69 Trans Am. The \’Trans-American\’ was a road race – organised by The Sports Car Club of America. The Pontiac Trans Am was a star turn. Complete with rear spoiler, beefed-up chassis and Ram Air power delivery, it was a muscle car par excellence. Blue and white livery set it off to a tee. Its split-grille nose became the stuff of legend. Indeed, the Firebird would be a flagship for the Pontiac brand for years to come.

The Firebird entered its second phase in 1970. Restyled for the new decade, it was in the Seventies that the car came into its own. In \’78 alone, Pontiac sold more than 93,000 Trans Ams. Customers could choose one of three models – standard, luxury Esprit or Formula. For sure, the Firebird was spreading its wings. In fact, it was lucky to have fledged at all. GM considered pulling the plug on the Firebird in \’72. They were not convinced that performance cars were the way to go. Thankfully, the Firebird was given the benefit of the doubt. As things turned out, GM would be well-rewarded for their faith in the Firebird.

A third generation of Firebirds arrived in the Eighties. Its charismatic, but time-worn nose had had plastic surgery. It was now more finely-chiselled – and sported cowled headlamps. \’87\’s GTA version featured a 350 cu in V8 engine. Top-of-the-range as it was, the GTA was good for 125mph. It hit 60 in just 5.4s. Design-wise, though, the Firebird was starting to look its age – especially parked next to hot foreign competition. As a result, sales suffered. So, Nineties Firebirds were given a stylistic face-lift. No ravages of time, though, could detract from the glamour of the early years. One of the all-time great American automobiles, the Pontiac Firebird blazed a phoenix-like trail. Whatever automotive fashion dished out, it somehow always rose from the ashes!