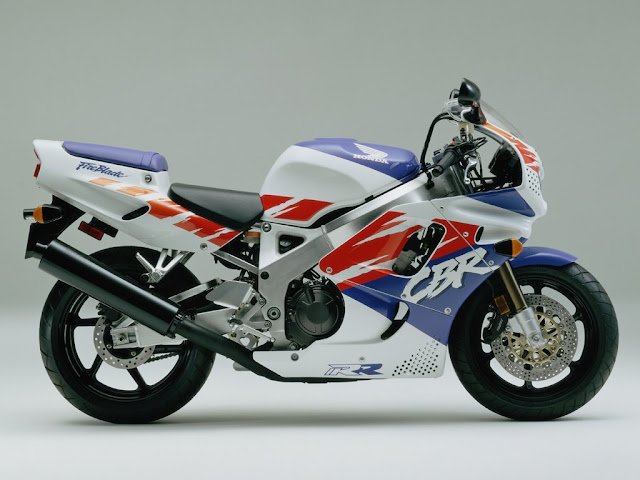 The launch buzz around the Honda Fireblade was electric! It was released in \’92 – to rapturous applause, from press and public alike. In the unlikely event that you saw one stationary, it was sure to be engulfed in a gaggle of onlookers. Months of speculation had induced a feeding frenzy of interest in the new Blade. Tadao Baba was the boffin in charge of its development. The Fireblade – or CBR900RR – was the first Honda to sport the \’RR\’ nomenclature. The bike\’s racing traits had been duly declared!

The Fireblade screamed street-fightin\’ bike! Squat – and barrel-chested – it looked like it would be up for a ding-dong at the drop of a hat. Steep steering geometry – and a super-short wheelbase – meant the Blade cut corners to ribbons. Suspension settings were decidedly \’firm\’. 407lb dry was no weight at all for a bike of its size. Factor in 113bhp – at 10,500rpm – and the results were always going to be explosive. Top speed for the Blade was 167mph. How much the holes in its fairing helped is not known!

Visually, too, the Blade was well up to speed. Blessed with eye-catching graphics – and a super-big tank – it was a brilliantined bobby dazzler of a bike! A beefy twin-spar frame – and braced swing-arm – visibly signalled the strength of the cycle parts. The sunk-down seat – and bulbous tailpiece – lent rock-solid support. Too solid for some, no doubt. Padding was minimal. Very minimal! But then, comfort was never the name of the Blade\’s game. The Fireblade was a single-minded superbike. High-speed hats off to Honda!