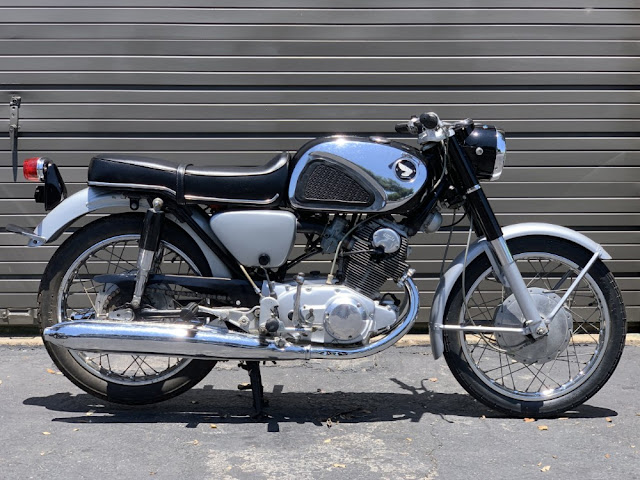 The CB77 was a landmark bike for Honda. The firm started up in Hamamatsu, Japan. In a wooden shed! Just as Harley-Davidson had done, in Milwaukee, USA … except theirs was made out of tin! Okay – so sheds is where similarities end between the two marques! Of course – like Harley-Davidson – what Soichiro Honda\’s company went on to achieve is the stuff of motorcycling legend. Not surprising, really. That small shed was home to the Honda Technical Research Institute. In its early days, that is!

Three years in and Honda produced its first bike. The 98cc machine was dubbed the Dream. Sales were sound. That set the scene for the two bikes which put Honda on motorcycling\’s map – the CB72 and CB77. The larger of the two – the 305cc CB77 – was launched in \’63. It was up against the \’Brit bikes\’ of the early Sixties. They ruled the two-wheeled roost, at the time. Not for much longer! Next to the likes of Triumph and Norton, the \’Jap bike\’ came supremely well-equipped. In engineering terms, it blew them away, basically. While it did not quite clock up the mythical \’ton\’ – the 100mph so beloved of British riders – its acceleration was scorching. By comparison with Brit bikes, anyway. And – with a top speed of 95mph – it came close. The CB77\’s parallel twin motor revved out to 9,000rpm. The bike weighed in at just 350lb dry. Do the math, as they say!

Several factors gave the CB77 the edge over similarly-sized British bikes. Top of the list was engine design. A 180° crankshaft allowed the two pistons to move up and down alternately – balancing each other out. That took the smoothness of the ride to another level – at least, relative to the Brit bikes. The engine was held securely in situ by a tubular steel frame. Telescopic front forks – and twin rear shocks – raised the suspension game, too. Two sets of solid, sure-stopping drum brakes were fitted. The net result was that the CB77 accelerated smoothly, handled well and pulled up in short order. On top of all that, it was oil-tight and reliable. Not something that could be said of every British-made bike! In the States, it was sold as the Super Hawk. The CB77, then, was Honda\’s first attempt at a full-on sports bike. Suffice to say – there were others in the pipeline!