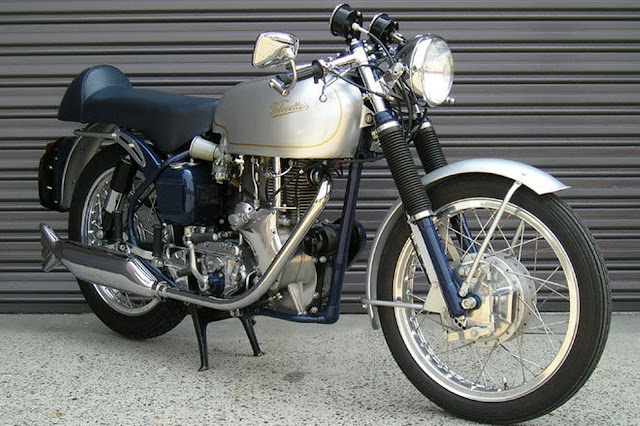 Velocette was a stylish name for a motorcycle manufacturer. But, it did build sleek, sophisticated products. The Venom Thruxton was one of them. Venom aptly described the ferocity of the bike\’s tuned engine. Thruxton was, and still is, a racetrack – near Andover, England. That, too, was appropriate – since the circuit\’s free-flowing layout is tailor-made to give race bikes their head.

The Thruxton was first and foremost a roadster. That said, it was easily converted to Clubmans spec. As a production – or \’proddy\’ – racer, it provided the best of both worlds. Along with its potent motor, it boasted rock-solid suspension, light-alloy wheel-rims, and a twin-leading-shoe front brake. On the open road, the Thruxton cruised at 90mph. That was good going in \’65 – especially from a single-pistoned machine.

The Thruxton was purposefully styled. Finessed features were a fishtail silencer and ventilated front drum brake. The Venom\’s jet-black paintwork was moodier than Marlon Brando – on a bad day! The cursive script of the Velocette logo set off a sweetly-shaped tank, to a tee. A combination, then, of rugged good looks and raw power, the Venom Thruxton spat two-wheeled poison. Best not get too close to it … and the alluring aroma of its Castrol R oil!