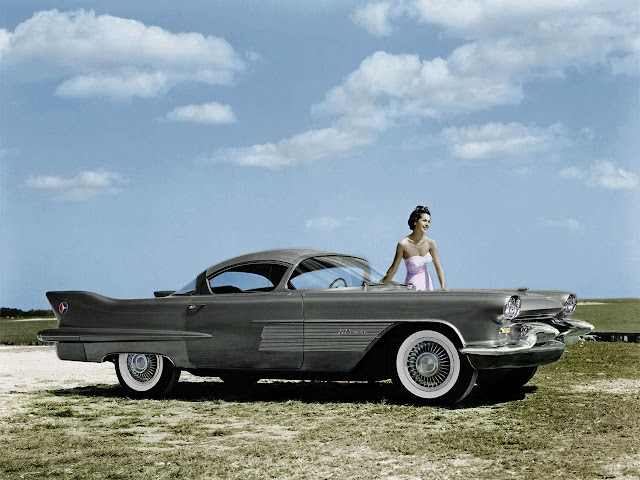 When it came to Fifties \’dream cars\’, GM set the bar high. The Motorama was a travelling show of avant-garde automobilia. The Cadillac El Camino was a \’space-age\’ case in point. El Camino Real – The Royal Highway – was a sobriquet for Highway 101. While the El Camino sounded Spanish, it was American as apple pie. It was also one of the most influential concept cars ever created. Many El Camino features would be seen on production Cadillacs, by decade\’s end.

Show car though it was, a V8 was duly dropped into the engine bay. 230bhp was, in theory, available. El Camino capacity was 5,422cc. Had Cadillac\’s boffins wanted it to go touring, it was good to go. As it was, the lure of the open road played second fiddle to the car\’s publicity-seeking uses.

To that end, the El Camino had styling to die for. Its pearlescent paint-job, in particular, was a cinch to turn heads. Silver had never looked so good! And the radical roof-line was almost as engaging. Curvaceous windows – and deftly-drawn pillars – were a visual treat. Brilliantly topped off by brushed aluminium. Front bumpers referenced bullets. Front arches revealed intricate wheels. At the rear, tail-fins were a pop-up delight. The El Camino blended seamlessly into the Motorama mix. Cadillac\’s class of \’54 also comprised the Espada and Park Avenue. But the El Camino, above all, would be their blueprint for the future.