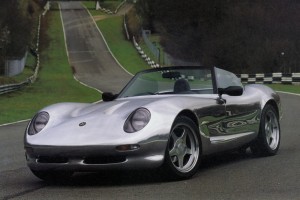 The Caterham 21 debuted at the Birmingham Motor Show – in ’94. It marked 21 years of Caterham Seven production. Design niggles delayed the launch of the new car for two years. The 21’s enhanced equipment levels posed an engineering challenge to Caterham. Respected in the industry though it was, Caterham had not hitherto taken on a car of such complexity. The 21 prototype dazzled show-goers – clad, as it was, in silver-polished aluminium. The production car’s finish would be a little more prosaic – standard paint on glass-fibre. The aluminium job, however, could still be had as an extra. The prototype was fitted with a Vauxhall JPE engine. Production models had Rover K-series 1.6-litre motors. There was also a 21 with a VHP – Very High Performance – version of the MGF 1.8-litre mill.

When the 21 did hit the road, it was to great acclaim. Aerodynamics were especially well-sorted. A top speed of 131mph spoke to that. Chassis-wise, the 21 was similar to the 7. The new car thus inherited the impressive handling characteristics of its predecessor. An important way, though, in which the two cars differed, was in terms of practicality. The 7 – while amongst the most exhilarating four-wheelers ever built – was not exactly user-friendly. It was geared pretty much entirely toward the ‘pure driving experience’. The 21, though, came with much more in the ‘all mod cons’ column. So, as an all-round motoring package, it was streets ahead of the Seven.

Caterham passed the 21’s styling brief to Iain Robertson. He doubled up as a journalist. Robertson was inspired by the race-bred lines of the Lotus Eleven. The 21’s interior was equally well-crafted. Though the cockpit was narrow, wide sills kept it the right side of cramped. Visually, the vertical strip of switches was a deft touch. Caterham limited producton to 200 cars per year. That kept it from biting off more than it could chew. And, of course, there was always the Lotus legacy to consider. The Norfolk marque was the progenitor of the Caterham line. For sure, the 7 had done Lotus proud. The 21, then, upped the number of its talented offspring!