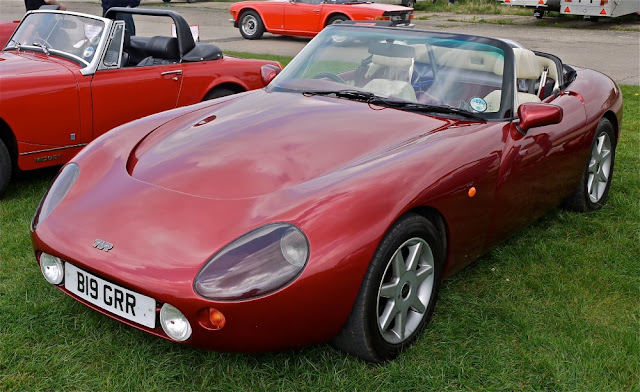 The seaside town of Blackpool, England, is famous for its Illuminations. Similarly, TVR – the sports car manufacturer, based in the resort – lit up the motoring world. It did so, not with a dazzling display of neon lights – but with the gorgeous Griffith. The new TVR heralded a return to raw V8 power. The TVR brand itself did not need rejuvenating – but the Nineties sports car market did. The Griffith played a pivotal part in that. In five-litre form, the Griffith 500 produced 345bhp. That gave a top speed of 163mph. 0-60 arrived in a tad over 4s. Such fierce acceleration reflected plenty of mid-range poke – as well as gargantuan low-down grunt. The Griffith was inspired by the TVR Tuscan – a pure-bred, blood-and-guts racer. The latter had first appeared in the late Eighties. The iconic TVR Tuscans tore strips out of each other, in a one-make race series. Even TVR chairman Peter Wheeler dived headlong into the high-speed fray. He battled it out with the best of them, in his own racing Tuscan. A fresh take on the company car, as it were!

Design-wise, the Griffith came with a full complement of curves and subtle touches. Most notably, the air ducts – on the bonnet and doors – were cutting edge cute. The interior, too, was impeccably styled. Copious amounts of leather and wood were inlaid with aluminium. Not surprisingly – with all its technical and aesthetic assets – the Griffith sold well.

With its RWD system maxed-out, the Griffith\’s exhaust note was ear-splitting. With hood down – and revs up – British sports car drivers had never had it so good. The Griffith prototype debuted at 1990\’s Birmingham NEC Show. To say it wowed onlookers would be understatement. Automotive folklore has it that 350 deposits were stumped up that same day. Which translated to an order every eight minutes! The first production cars swanned into showrooms in \’92. The Griffith was designed, developed and built almost exclusively by TVR. Given its relatively small operating scale, that was an astonishing feat. TVR went one step further, though. At £24,802 new, it even managed to keep the Griffith competitively priced!