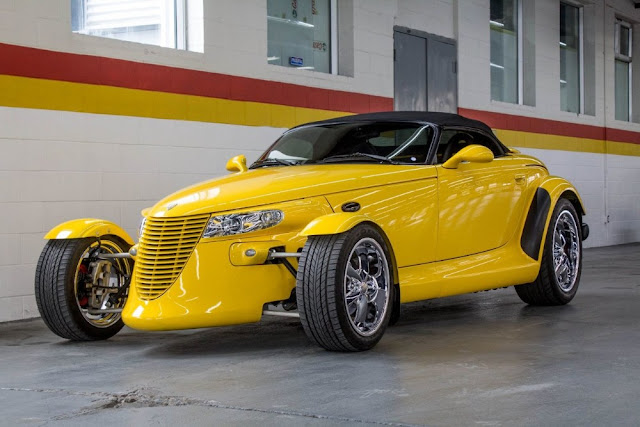 The Plymouth Prowler was a hot rod for the new millennium. Tom Gale was head of design at Chrysler – Plymouth\’s parent company. He had long been a hot rod aficionado – and was especially enamoured of those made in the 1930s. Gale picked up his pen – and drew a modern variant on the classic theme. Fast forward to Chrysler\’s stand at the \’93 Detroit Auto Show. Gale\’s sketch had been turned into \’dream car\’ reality. The public\’s response was favourable, to say the least. Chrysler\’s top brass immediately saw an opportunity to reinvigorate the Plymouth brand. They reckoned hot rod culture was deeply embedded in the American psyche. Lots of folk would love to own one – but did not have the time or know-how to build it. Why not build it for them? Feasibility studies duly completed, the Prowler project was given the green light.

According to Chrysler, customers were getting the best of both worlds. The Prowler provided the practical benefits of modern technology – as well as retro-style good looks. Whopping 20″ rear wheels were wrapped in 295-section rubber. The front wheels were 17″. The nose of the car was iconic hot rod – high cheek-bones, jutting jawline, and a slimline grille. Only the bumpers on some models gave the chronological game away. They were a plastic concession to modern-day safety legislation. Consummately-crafted suspension components were in plain view. Bodywork was steel and aluminium.

The Prowler was powered by the Chrysler Vision V6. The 3.5-litre engine produced an impressive 218bhp. Purists would probably have preferred it to have been a V8 – but you cannot please everyone. Top speed was 125mph. 0-60 was reached in 7.7s. Acceleration was assisted by light weight – just 2,900lb of it. 11,702 Plymouth Prowlers were sold – in a five-year run. Chrysler were proved right … the hot rod was still an integral part of the American Dream!