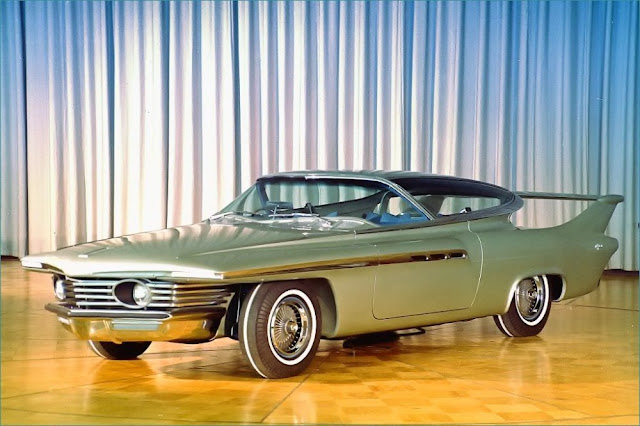 The Turboflite had radical written all over it. Chrysler\’s goal was to put a gas-turbine-powered car in the showrooms of America. Certainly, the system had been seen before – in land speed record cars! Chrysler wanted to make it widely available. Albeit, detuned a tad! The R&D work was already done. In \’54, Chrysler installed a gas-turbine engine in a Plymouth. The car was driven from NY to LA – by Head of Research George Huebner. 50 or so variations on the Plymouth theme had been built. Not to mention, numerous new motors. In \’61, the test schedule was complete. Chrysler unveiled its latest gas-turbine creation. It was dubbed the Turboflite.

Maury Baldwin designed the new dream car. He did not pull any stylistic punches. Most notably – and that was saying something – it was fitted with an aerofoil. Not just any old aerofoil, though. This one pivoted – to help with braking. At the front, open wheels and a pointy nose smacked of street-rods. Baldwin had not held back on the chrome. The Turboflite\’s interior was similarly striking. Space-age seats looked suitably enticing. Electro-luminescent lighting added a relaxed ambience. Even climbing into the cabin was fun. Opening the doors automatically raised the cockpit canopy, for ease of access.

The Turboflite\’s gas-turbine motor was code-named CR2A. Chrysler claimed it weighed half as much as their standard V8. After all, it was made up of just 60 – rather than 300 – moving parts. Chrysler knew it worked. A Dodge truck put it through its paces, prior to the Turboflite\’s launch. Ghia were recruited to coachbuild the car. The Italian masters were given the most exacting of briefs. Chrysler were serious about this one – so, every last detail mattered. In due course, Ghia built bodies for the Chrysler Turbine – the production version of the Turboflite prototype. But while it was ultimately, then, a means to an end, the Chrysler Turboflite\’s exuberance made it more than a mere staging-post!