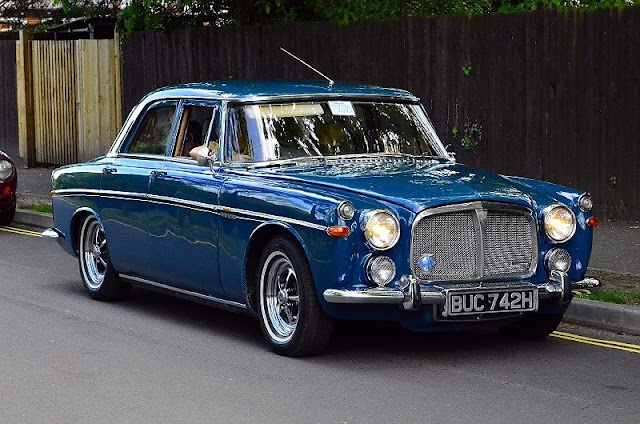 The Rover P5 was private transport of the highest order. For years, it ferried the great and the good about their well-heeled business. Government ministers – and top civil servants – put down their attaché cases and relaxed on its sumptuous seats. Security picked up the purr of its engine, as one – whether at Downing Street, Parliament or Buckingham Palace. So, on state occasions, the four-wheeled presence of Rover P5s was a given.

The P5 was impeccably styled by David Bache. It was so-named because it was \’post-war design number 5\’. Its exterior was the pinnacle of saloon car sophistication. Sober lines – and toned-down hues – exuded due gravitas. The interior, too, was quality incarnate. The materials used said it all. The dash was fashioned from African cherry wood. The carpet was Wilton. Seats were, of course, luxury leather. To all intents and purposes, the P5 was a banqueting-room on wheels. The pliancy of its ride echoed the subtlety of its styling. The P4\’s separate chassis was now history.

On the surface, the P5 was the quintessence of Englishness. From \’67 on, however, the US lay beneath – in the form of a 3.5-litre Buick engine. It brought some much-needed speed to the P5 package. No more running late for top-level meetings. Previously, the P5 had been powered by a 3-litre motor. Buick\’s V8 made 185bhp. The P5\’s top speed climbed to 110mph. The powerplant was sourced from parent company GM. Rover got it at a discount – since it had become surplus to requirements. The gearbox was 3-speed auto. Thoughtfully, Rover provided a toolkit – albeit, somewhat basic. It was discreetly tucked away in the dashboard. Not that the P5\’s passengers would have had much of a clue what to do with it! Many of the key decisions of our times were made with the help of the P5. Many a soirée could not have happened without it. In motoring terms, society\’s crème de la crème had never had it so good. We must all, then, be thankful to the Rover P5 … I think!