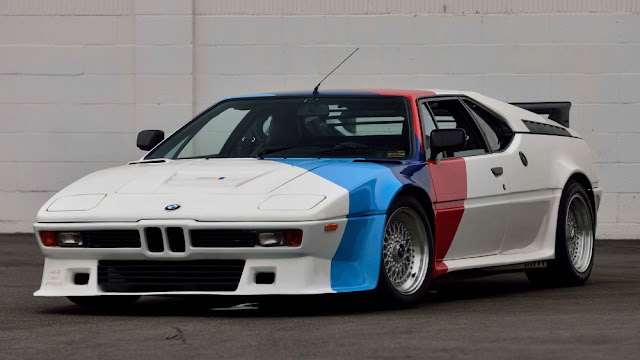 The BMW M1 was race-based, to its beautifully-conceived core. It was made – by BMW Motorsport – as a response to the Porsche 935. BMW\’s CSL was by then past its sell-by date – and struggling to keep up with the Porsche. That was in the Group 5 Silhouette series. From BMW\’s point of view, the gap needed to be closed – lest race losses lead to the same on the balance-sheet! Cometh the M1 – and its M88 straight-six motor. The M1 was the first BMW roadster to be fitted with this race-bred powerplant. The cast-iron bottom-end was sourced from the BMW parts bin. In every other respect, it comprised state of the art engineering. The 24-valve twin-cam head was chain-driven. The crankshaft was fashioned from forged-steel. The M88 had longer conrods – and a race-derived dry sump. It was fed by Kugelfischer-Bosch indirect injection. The net result was a top speed for the M1 of 161mph. BMW were back on track!

Group 5 homologation made the M1 roadster resemble its racing counterpart – within reason, at least. 400 road-going \’equivalents\’ were required to be built, before the M1 racer be given the keys to the grid. Unfortunately for BMW, by the time the M1 was ready to go racing, the homologation rules had changed! The stipulation now was that 400 cars already have been sold. That threw a giant-sized spanner in the works – since that was liable to take a while, even for a company with the cachet of BMW. By the time it had complied with the new regs – in \’81 – the M1 was no longer competitive! Not at the racetrack, that is. On the road, it was more than a match for most of its rivals. A tubular steel chassis – and mid-engined layout – provided near-perfect handling. The ride was comfort incarnate. Initially, Lamborghini had been asked to design the chassis. Mounting financial woes, though, at the Italian marque, meant BMW sorted their own chassis, in the end. Once done, a 5-speed ZF trans-axle transferred 277bhp to the tarmac. Massive vented disc brakes retarded the M1 with aplomb.

The M1\’s looks were seen to by Italdesign. The agency would, however, have been first to acknowledge the debt owed to the BMW Turbo – the prototype by Paul Bracq. Between the pair of them, the M1 was a masterclass in supercar styling. It was built in both Germany and Italy. Indeed, it may be said to have embodied the best of both realms. For all that, a mere 450 M1s were manufactured. A harsh critic, then, might judge it a failure. After all, it was no great shakes, either at circuits, or in showrooms. Saying that, the BMW M1 was still a hugely impressive sports car … which surely smacks more of success than failure!