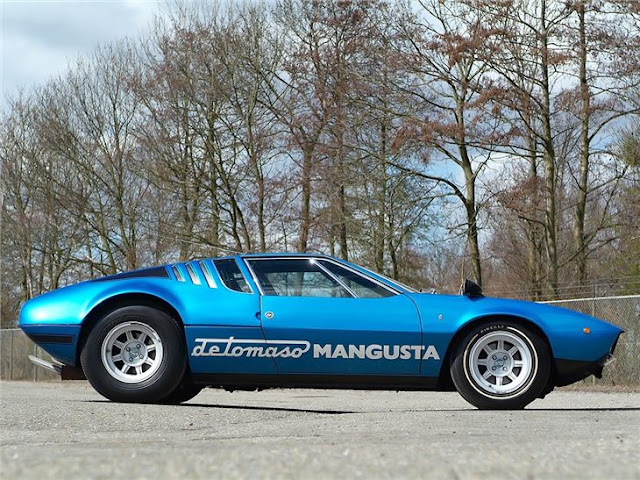 Coachbuilt by Ghia, the de Tomaso Mangusta was about as stylish as a sports car gets. Well, apart from its name, that is. A mangusta is a mongoose. Absolutely no offence to mongooses intended, but they are not typically considered the height of chic. Yes, I am sure there are exceptions to that rule. At any rate, so far as the roadgoing Mangusta went, its body was a sleek lattice-work of lines and slats. In like manner, graphics were elegantly scripted.

But the Mangusta was far from all show. It was bang on the money technically, too. The Ford 4.7 V8 engine put out 305bhp. Top speed was 250km/h. Released in ’66, just 400 Mangustas were made. 280 of them were sold in the States. American sales were substantially upped by fitting the Ford V8. The US was a fair old jaunt for the Mangusta, from Modena, Italy – that mythical Mecca of all things motor racing. The perfect location, then, for Alejandro de Tomaso to base his workshop.

De Tomaso hailed from Buenos Aires, Argentina. His father was a government minister – and his mother an heiress. Suffice to say, Alejandro was unlikely to go hungry. It was not long before de Tomaso’s motoring muse came calling – mainly in the shape of Maseratis. At 27, he moved to Italy – to pursue a career as a racing driver. De Tomaso was quick – but not quick enough. So instead, he set up a supercar company … as you do! As a designer – rather than driver – de Tomaso fared better. Before long, both sports cars and single-seaters were rolling out of his \’shop. In his youth, de Tomaso idolised Fangio – the Argentinian race ace. Acolyte could never match master, in that regard. But – in penning cars like the Mangusta – de Tomaso had found his niche. His own means of automotive expression, you may say. Oh, by the way – if you are thinking about buying a de Tomaso Mangusta, a word to the wise. Never underestimate its performance. Mongooses eat snakes. You’ve been warned!