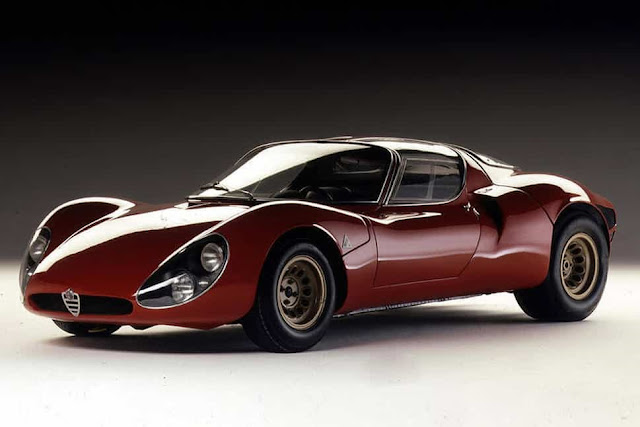 The driving force behind the Alfa Romeo 33 Stradale was Franco Scaglione. He was an engineering whizz-kid from an early age. He was also blessed with precocious design sensibilities. A mechanical marvel of one sort or another, then, was always on the cards. It was just a question of what. Thankfully for car buffs, automobiles were amongst the subjects Scaglione found himself drawn to.

Engineering, then, was a walk in the park for the young Scaglione. Even as a student, he was a natural. He duly graduated to more advanced learning. That is, until the Second World War threw a spanner in the works. Scaglione\’s studies – started so swimmingly – were decimated. Back in Civvy Street – in \’46 – he was 29 years old. Training to be an engineer was in tatters. Time to look for alternative employment. Maybe the motor trade held something for him?

The Fiat Abarth was Scaglione\’s first full-on design gig. Not a bad way to cut your styling teeth! Launched in \’52, he was on Bertone\’s books at the time. Surprised by the scale of the Abarth\’s success, Scaglione opted to go solo. In \’59, he opened his own studio. The jewel in its crown would be the Stradale. Using Alfa\’s Type 33 racer as a template, Scaglione fashioned a suitably muscle-bound sports car. Aluminium bodywork was draped over a tubular steel frame. Alfa\’s 2-litre V8 was installed in the back. Scaglione drew the engine in plain view – in all its mechanised majesty. Once fired up, it made 230 bhp. And full use could be made of the power. For a start, the throttle was ultra-responsive. The gearbox was a flexible 6-speed affair. The Stradale\’s dimensions were hang-it-out compact. Plus, it weighed in at just 700kg. In its short production run – from \’67 to \’69 – just 18 Stradales were built. Oddly – given the built-in exclusivity – the price tag was relatively low. That did not detract from the Stradale\’s prestige one iota. Carrozzeria Marrazzi made a magnificent job of the coachbuilding. Franco Scaglione, of course, drafted a car design tour de force. In short, the Alfa Romeo 33 Stradale radiated excellence. Scaglione, then – World War Two interruptions notwithstanding – got there in the end!