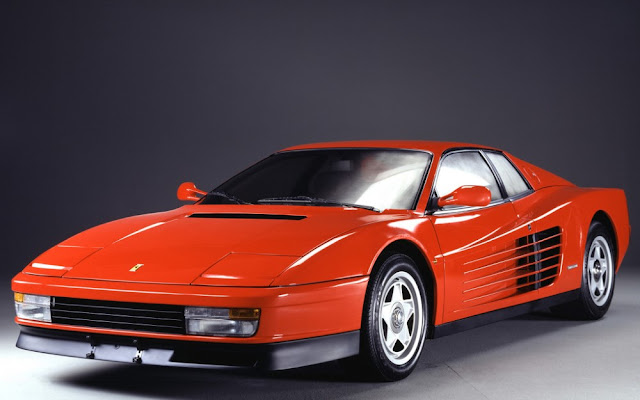 The Ferrari Testarossa was released in \’84. \’Testarossa\’ is Italian for redhead. That referenced the red cylinder head of the car\’s 5-litre flat-12 engine. Within the head were 4 valves per pot. They were heat-protected by state of the art nickel-alloy. That was a wise move on Ferrari\’s part – since there was every possibility of temperature build-up, at some point! Power peaked at 390bhp.

While the nickel-alloy valves worked a treat, yet more needed to be done to dissipate heat. The engineers had done their bit – now it was down to the designers. The Testarossa was mid-engined – to help with handling. So, cooling was moved to the rear. Pininfarina oversaw the styling mods. They drafted a wide back-end – with plenty of room for the cooling components. The side-mounted air-ducts became trademark Testarossa.

The Testarossa\’s top speed was 180mph. 0-60 arrived in 5.5s. Steering was superb – the smallest of inputs being sufficient. The body was, in the main, aluminium – assisting with weight loss. Aerodynamics were wind tunnel-tested – including downforce. In \’92, the Testarossa 512 TR appeared. The fastest production car in the world at the time, it knocked the Lamborghini Diablo off top spot. The Testarossa F512M came along in \’94. By now, it was a true 200mph supercar. Redheads are reputed to be a tad on the fiery side. The Ferrari Testarossa did nothing to debunk that stereotype!